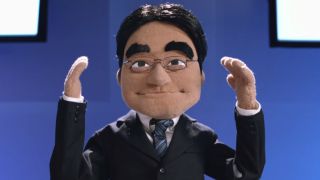 Satoru Iwata, Nintendo's long-standing and incredibly smart CEO, has passed away. It's news that has brought tributes from both companions and competitors of Iwata's, not to mention an outpouring of heartfelt condolences from the gaming community at large.

After taking over from the Yamauchi dynasty and becoming its president in 2002, Iwata turned Nintendo into an immeasurable force for gaming that stood for fun and innovation. Iwata's humility, ability to accept responsibility for mistakes, and genuine love for gaming made him one of the greats - not to mention that almost anyone with some interest in gaming will have enjoyed an experience that was at least partly thanks to Iwata.

You probably know that Iwata oversaw the launch of the Wii, and you might know that he launched the DS, a handheld console that was predicted to be outpaced by its technologically superior rival, the PSP. Both of these things turned out to be huge successes, proving that innovation can always triumph over power - and that Nintendo definitely had the right guy at the top.

But there's plenty more to Iwata that you might not know about.

1. He valued employees highly, sometimes at his own expense

Iwata was never one to shy away from the company's mistakes, and following a profit slump in 2013 he announced that he would slash his pay in half for five months. He was also not a fan of reducing staff. During the 73rd annual shareholders meeting, he was asked why the company hadn't restructured to account for operating losses. His response was spot on:

"If we reduce the number of employees for better short-term financial results, however, employee morale will decrease, and I sincerely doubt employees who fear that they may be laid off will be able to develop software titles that could impress people around the world."

"I also know that some employers publicise their restructuring plan to improve their financial performance by letting a number of their employees go, but at Nintendo, employees make valuable contributions in their respective fields, so I believe that laying off a group of employees will not help to strengthen Nintendo's business in the long run."

2. He was an exceptional programmer who saved Earthbound

At the time that Mother 2 (aka Earthbound) was being developed, Iwata was working as a programmer and the head of HAL Laboratories. When he saw the difficulties that the development team were having with Mother 2, he voiced his doubts that the game could be completed on time. "If we used what you have now and fix it, it will take 2 years," he told them. "If we can start fresh, it'll take half a year."

Iwata then took over development of Mother 2, and returned a month later having got the game's map scrolling feature to work. Once he'd joined the team, the game only took another year of development thanks to Iwata's programming magic.

3. He managed to cram a country into a game cartridge

When Gamefreak made Pokemon Gold and Silver, only the Johto region was included in the game. Iwata thought that players deserved more, so he spent some of his spare time squeezing in the entirety of Kanto (the region from Pokemon Blue and Red) using some very heavy compression. He essentially fit in a whole extra game like it was no big deal.

4. Then he ported over the Pokemon battle logic without reference documents

...which is a big deal. The first step in creating Pokemon Stadium was to analyse the battle logic from Pokemon Red and Green and carry it over for the Nintendo 64. But in the absence of any reference documents, Iwata read through the Game Boy source code directly and managed to rework it for the 64. Oh yeah, and he did it in a week.

Iwata knew that the Wii needed a Super Smash Bros. game, so at E3 2005 he confirmed that a game would be coming. His plan was clever: he would then approach HAL and ask them to make a new Super Smash Bros. title, and if they refused, he would have Super Smash Bros. Melee (the GameCube's entry in the series) ported over to the Wii with Wi-Fi support. Luckily, HAL agreed to make Brawl.

6. The Miiverse integration in Super Mario 3D World was his idea

Nintendo's often been criticised for being slow to adopt online gaming, but the integration of the Miiverse in Super Mario 3D World truly let you feel like you were part of a bigger community. The game's map would be populated by the Miis of players around the world, whose messages would pop up as you passed them. A small but effective feature.

7. He actually went out and bought Ocarina of Time when it launched

The Legend of Zelda: Ocarina of Time was launched in November 1998, when Iwata was finishing up Super Smash Bros for the N64. " I was at the Nintendo Kyoto headquarters for a meeting to prepare for its launch, and I bought Ocarina of Time on my way home," he said.

Iwata coded his first commercial game during the time of his college education in Tokyo. The game was published by HAL and launched for the MSX home computer. You can see it in action below.

9. Iwata updated his Mii character to reflect his illness

Iwata's health problems were well documented, but it seemed that everything was under control - which made the news of his death even more tragic. Much like Steve Jobs, Iwata lost a lot of weight in lead-up to his death. He updated his Mii avatar to reflect this, along with the message shown below.

10. The NX will likely be an embodiment of Iwata's ideals

We don't know much about Nintendo's next console, but we do know it will be different to what we've seen before. Last time Nintendo shook things up we got the incredibly successful Wii - so we're understandably excited to see what it has in store this time. Iwata was a big believer in bridging the gap between handheld and console, and there's a good chance the NX will reflect this philosophy.