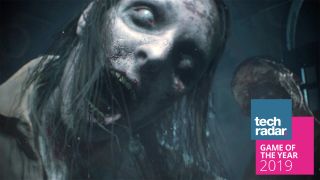 It's been an interesting year for gaming, as the current generation of consoles slowly creep towards the end of their lifecycles. The PS5 and Xbox Series X are officially on the way, landing in late 2020, meaning we're in a kind of limbo between developers releasing games for this generation and announcing plans for next-generation games - some might even crossover.

Despite being in this weird limbo, we've played some fantastic games this year. We've revisited Raccoon City, cursed FromSoftware once again, tried to catch em' all and bothered villagers as a troublesome goose. But which games have truly stood out in 2019?

It’s been a hard task, but the TechRadar team has put their heads together and thrashed out which games were our favorites this year. These aren’t necessarily the games we think have had the most cultural or technological impact, nor are they ranked, they’re simply the team’s favorite games from this year. Let’s be honest, you may not agree with all our picks  - as we all have different tastes and opinions - but it's hard to put together a list that will please everyone.

So, without further ado, these are TechRadar's games of the year 2019.

Blood & Truth is one of our favorite VR games ever, never mind this year. Sony London Studio truly knocked it out of the park with this Guy Ritchie style FPS that shows that VR shooters can be wondefully immersive - and downright fun.

Its storyline is super cheesy but, mechanically, Blood & Truth is a marvel, allowing you to interact with objects and weapons as you would in real life (well as much as is possible in VR) and smoothly move from cover to cover through levels.

Read more: Blood and Truth: how Sony’s London Studio is taking VR to the next level.

Pokémon Masters was somewhat of a surprise success. We always knew it wouldn't hold a light to Niantic's Pokémon Go, but the free-to-play mobile game has definitely held its own in 2019.

Allowing players to battle their way through the Pokémon Masters League, Pokémon Masters emphasizes teamwork and puts the focus on trainer battles. It's been a great year for Pokemon.

Honorable mentions: What the Golf? and Sayonara Wild Hearts.

FromSoftware isn't known for making easy breezy games and Sekiro is no different. But that's exactly why we love it. Sekiro is what happens if DDR was an action game set in a gothic ancient Japan. It's breathtaking.

However, if you can't quite get a hang of the rhythm, then things are pretty tough going. FromSoftware's most recent offering is more punishing than we've seen before, but rare moments of success are extremely rewarding - you just need the patience for it.

The Legend of Zelda: Link's Awakening

2019 has been a fantastic year for remasters and Link's Awakening is one of the best. Nintendo took the original 1993 and redesigned it for the Switch, giving it a new toy-like art style that simply adds to the charm.

Link's Awakening brings classic Zelda to a younger generation, while improving upon issues that original fans may have had. It's a wonderful trip down memory lane for fans while also being easily accessible for newbies. We love it.

Honorable mentions: Luigi's Mansion 3 and Bloodstained: Ritual of the Night.

Check out our full The Legend of Zelda: Link's Awakening review.

When Obsidian Entertainment announced it was releasing a new RPG, there was little doubt that the Fallout: New Vegas developer would let us down. And it didn't.

Although it's not totally perfect, The Outer Worlds is as close to a new Fallout game as we're going to get right now. Blending interesting characters, peculiar creatures, choices galore and a heap of satire, The Outer Worlds sees Obsidian securing its crown as the king of RPGs.

Read more: How The Outer Worlds escaped the shadow of Fallout, according to its creators.

Apex Legends took us all by surprise when it kicked down the battle royale door back in February, introducing some fantastic quality-of-life features like sliding and pinging that have since been lifted by its competitors.

While Apex Legends may not have quite taken the crown from Fortnite, its certainly taken 2019 by storm and we're hoping Respawn Entertainment has some tricks up its sleeves to keep players interested in 2020.

Now, we know that not everyone will agree with this choice. CTR isn't the most technical racing game but it's a lot of fun and we love this remaster just as much as the original - if not more.

Following in the footsteps of the N.Sane Trilogy, Nitro-Fueled sees Crash and co getting a modern makeover. This remaster rolls together content from Crash team Racing, Crash Tag Team Racing and Crash Nitro Kart into one madcap game that you can play solo or online.

It's not been a great year for fighting games, so this wasn't a particularly difficult choice. Mortal Kombat 11 sees the brutal series returning better (and bloodier) than ever before, while introducing some fresh new features, like Fatal Blows) that move the series forward.

The campaign is solid but really, MK11 does what we expect: let us beat the living heck out of eachother.

Honorable mentions: None (it's been a poor year for fighting games).

Disco Elysium has been the dark horse of 2019 for a lot of people, releasing at the tail end to critical acclaim. And it deserves every ounce of that recognition.

Disco Elysium is like if someone made an RPG about Hunter S. Thompson as a grizzled detective. It's bizarre and wonderful. The best part of Disco Elysium? The writing and story. The conversation trees are unlike anything else we've seen this year and show that a game doesn't need to be big budget to tug at our emotions.

But the memes aren't the only reason we love Untitled Goose Game. It's the exact type of (almost) wholesome content we love to see in an indie game, artistically beautiful and the synchronization between the music and slapstick humor is sheer brilliance. HONK.

Game of the Year

It's the biggie and it was a tough call. But Resident Evil 2 Remake is officially TechRadar's Game of the Year.

Resident Evil 2 shows how a remake should be done, elevating the original game into a masterful modern horror experience. The attention to detail is astounding, encouraging players to properly explore RCPD and soak in the experience. Plus, exploring is a welcome break from trying to solve Resident Evil 2's head-scratching puzzles.

Best of all, you don't just have to play it once, you can replay again and again. And we sure will.

Once again Cyberpunk 2077 is the game we're most excited about. It won the same category last year but, now that we know more about it (like that Keanu Reeves will be in it), we're more hyped than ever.

CD Projekt Red's massive dystopian RPG will finally hit shelves on April 16, 2020 and we cannot wait to get our hands on what's sure to be one of the best games of 2020 - well, if the Witcher 3 is anything to go by.

Honorable mentions: The Last of Us Part 2 and Final Fantasy 7 Remake.