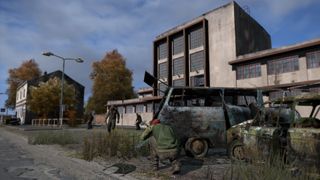 Multiplayer zombie survival game DayZ has been banned from release in Australia, due to the the Australian Classification Board's refusal to classify the title.

DayZ officially released in late 2018, but a physical edition of the game was due to release this year. However, the Classification Board refusing to give the title an age rating means it's unable to have a physical release in Australia. Not only that, but the board is also looking to having the game pulled from sale digitally.

But, what offending feature resulted in the lack of classification? Well, it just happens to be one that's not even in the game yet.

The Australian Classification Board gave DayZ a 'RC' (Refused Classification) rating back on June 4, ruling the title as a game which will "depict, express or otherwise deal with matters of sex, drug misuse or addiction, crime, cruelty, violence or revolting or abhorrent phenomena in such a way that they offend against the standards of morality, decency and propriety generally accepted by reasonable adults to the extent that they should not be classified". Check out the official rating for yourself.

The rating doesn't exactly specify which of DayZ's features resulting in the lack of classification. However, our friends over at Kotaku Australia obtained a report which claims the game was banned over "illicit or proscribed drug use related to incentives or rewards".

"Through general gameplay, the player is able to collect and use a variety of equipment, supplies and weaponry," the report obtained by Kotaku reads. "One of the options to restore the player's health is a marijuana joint, labeled 'cannabis', which is denoted by a cannabis bud in the player's inventory."

A toke over the line

While The Classification Board allows for drug use in games, the report specifies that these cannot be "detailed or realistic".

"If the use of cannabis within the context of this game did not act as an incentive or reward, its impact could therefore be accommodated within the R18+ classification," the report states.

So, where is this used in DayZ? Well, actually, it seems to refer to a feature that isn't in the game yet: cannabis.

As a Twitter user pointed out, cannabis is a feature that is due to come to DayZ in a later update however it hasn't been specified what the effects will be. It's possible that the feature's effects were specified for the classification and may have had a health benefit, which the report seems to suggest.

It's also possible Bohemia Interactive will remove the feature to allow the game to be classified for physical release.

While banning the game means you won't be able to purchase it in Australia, those who already own DayZ will still be able to play. Although, the issue does come in that DayZ is an MMO and having a large community is key to it thriving.