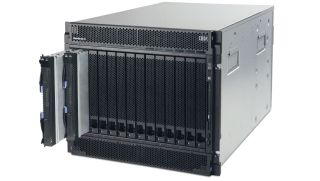 Lenovo's likely to use this type of rack for its ARM servers.

Lenovo has revealed that it is teaming up with the Hartree Centre, part of the STFC (Science and Technology Facilities Council), to build server solutions that use ARM-based processors.

Cavium ThunderX system-on-chips have been chosen with a standard 19-inch rack holding up to 12 servers, delivering 1,152 cores and occupying only 6U of rack space (which means that you could fit seven of these or 84 servers) in a 42U enclosure.

Lenovo didn't confirm which ThunderX SKU it used but Cavium's SoCs can scale up to 48 cores (which means that that each server has two sockets) and run on ARM's 64-bit v8 architecture.

Dell and HP have already confirmed that they're working on ARM-based server products. Other rivals to Cavium include AMD, Applied Micro, Marvell, Broadcom and Qualcomm.