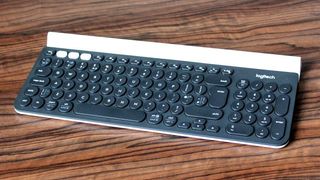 Logitech has been making keyboards for many years now and, like its mice, cater to everyone from desk-bound professional office workers to gamers who rely on their sharp reflexes to be victorious online.

Whether you're looking for a keyboard that pairs with several devices including your tablets and smartphones, a smartly-designed board for work and play with Cherry MX switches, or an all-out backlit gaming monster, the Swiss company likely has what you're looking for.

Scroll on ahead to check out our pick of Logitech's best keyboards for just about any scenario.

Logitech's best gaming keyboard lights up in the dark

It might not be Logitech's newest keyboard, but the Orion Spark has everything – and you'll be able to pick it up for less these days. Featuring a sleek design, thoughtful key placement (thanks to side-mounted macros), RGB backlighting with millions of colors, media keys, plenty of customization options and N-Key rollover, it still packs enough features to rival most other makers' flagship keyboards of today. With Logitech's Romer-G switches under the keycaps, it feels great to type on – it's just a shame that the wrist rest can't be removed as it sits at too much of a sharp angle for our tastes.

Most of Logitech's gaming keyboards of late have featured the company's crisp Romer-G keys, which is no good if you're a fan of Cherry's MX switches. With the Logitech G610 Orion Red, Logitech is offering an alternative  mechanical switch option in the form of Cherry Reds in a body that's near-identical to the company's impressive G810. It's fairly compact for a keyboard with a numberpad, features solid build quality, a healthy array of media keys, three levels of heigh adjustment and customizable white backlighting.

Logitech is targeting smartphone and tablet owners who prefer to see their device's display while sat at a computer with its latest keyboard, the K780. If you liked its predecessor, the K380, there's more to love here. (Literally thanks to its added numberpad.)

The K780 can still pair with up to three devices using Bluetooth or wireless, allowing you to chop and change between them, and it features the same comfortable rounded keycaps that remain a pleasure to type on. The star of the show, however, is the keyboard's base, which can hold mobile devices up to 11.3mm thick in an upright position. This places them within arms' reach to make anything from replying to WhatsApp messages or reading a digital magazine easy as pie.

Perfect for the couch

Featuring a built-in touchpad with left-and-right click buttons underneath, the Logitech K400 is perfect for using on a couch when your PC is hooked up to your living room TV. Its cheap construction means you aren't going to want to bash out documents (or do any sort of real work) on it, but the K400's spongey, rubber-dome keys  are more than adequate for browsing the web or sending messages on Facebook. There's a row of media keys at the top that provide shortcuts to playing music, visiting your browser's home page, locking the PC and turning it off. For an inexpensive piece of kit, the K400 is as practical as they come.

Logitech has followed up its Orion Spark G910 mechanical keyboard with the G810, which arrives with a refreshingly grown-up feel. Sporting Logitech's own Romer G switches, which aren't quite as squishy as Cherry's various switches, the G810 possesses a snappier feel than other gaming keyboards whether typing or gaming.

Featuring smart media keys that work equally well on both Windows and OS X, Logitech's latest keyboard is a solid all-round offering. If you're fed up of the weird markings, LCD screens and strange parts that come with competing "gamer-focused" keyboards, the G810 might be for you.