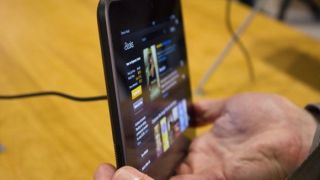 Amazon punched out a deluge of new devices today, including a family of Kindle Fire HDs.

While we know there's multiple models - a 7-, 8.9- and 8.9-inch 4G LTE version - and a bit about their software, we didn't know until now which operating system these bad boys are packing.

According to a published report, an Amazon spokesperson confirmed that the devices are running Android 4.0: Ice Cream Sandwich.

While it's not quite Jelly Bean - and there's no word on an update - at least we know the high-def devices have a newer OS running the show.

We don't know what's behind the Kindle Paperwhite -Amazon's new bright display beauty - yet but it could have Android under hood, too.

In 16GB, 32GB and 64GB (for 4G LTE) varieties, these devices promise to be a powerful kick to the Kindle line-up.

We've got some first hand reviews here, and with mildly competitive pricing, you can judge for yourself if these tabs are worth investing in.