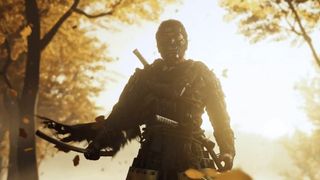 Ghost of Tsushima, the highly-anticipated samurai action game for PS4, has just dropped a new trailer – and it's looking beautiful.

The trailer shows a scene taking place in the autumnal-colored forest of Tsushima, Japan. Possible an ambush, it sees the death-masked protagonist charging at a group of other samurai, with blade and smoke bomb in hand.

This month's State of Play – the PlayStation-themed live stream showcasing the latest PS4 games and announcements – had a medley of titles to show off.

There weren't many jaw-dropping announcements, partially thanks to a series of leaks regarding the upcoming Resident Evil 3 remake, and Untitled Goose Game's move to PS4. But even the briefest glimpse of Ghost of Tsushima, seemingly using the in-game engine for the trailer's footage, is enough to keep us sated for a while.

There's no release date accompanying the trailer, sadly: just an ominous "to be continued" following the action.

We heard rumors of a 2020 release back in June, though there's been no confirmation on this so far. With the PS5 launching at the end of 2020, though, it could be we'll see this game launch as a cross-gen title in the next-gen console's opening weeks or months.