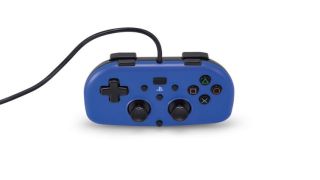 Mini gaming devices are becoming all the rage these days, thanks to the success of devices like the SNES Classic Mini. Not to be outdone, Sony has announced a new Mini Wired Gamepad for the PS4 that's specifically aimed at kids.

Just don't get the impression that it's a 'mini' version of Sony's popular DualShock 4 controller. The Mini Wired Gamepad is flat and 40% smaller, which means it lacks some of its bigger cousin's standout features, like vibrations, motion sensing, the touch pad, the light bar, the speaker and even a headset jack.

It's even wired, leading some folks on Sony's announcement page to question the wisdom of releasing a device aimed at kids with a 10-foot-long, permanently-attached cable.

"Conveniently wired so your kids can trip on it and drop your PS4 Pro on the floor," says a commenter named LeMatster.

AKA the 'DualShock Essentials'

But, otherwise the Mini Wired Gamepad comes with what Sony calls 'essential functions,' including the right and left analog sticks, the two shoulder buttons and two triggers, a directional pad and the four action buttons. If you're just wanting to play games, it gets the job done.

A new, small button visible in the product photos appears to take the place of the touch pad, which should come in handy for games that use it for separate menus. Sony also claims you'll be able to use the analog sticks to mimic certain touch gestures.

At $30 (around £23/AU$38), it costs half as much as its fully featured counterpart, which makes it an attractive buy if you're just looking for a tike-sized controller. If you're specifically looking for an extra gamepad, though, you're probably better off just paying double for another DualShock 4.

Sony says the device will be available in the US and Canada sometime 'this holiday,' but hasn't specified a wider release – sorry, UK and Australia readers.