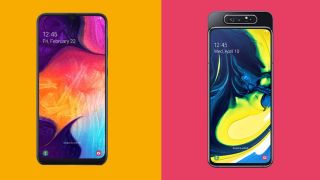 The Samsung Galaxy A50 and Galaxy A80 (Image credit: Samsung)

The definitive smartphone in the series is the Galaxy A50 – it's got solid mid-range specs, a fairly low price, and stands as evidence of what Samsung is trying to do with the newest Galaxy A phones.

But, there's also a dark horse of the range, in the form of the A80, with its unique design feature in the form of a pop-up rear panel that houses the front, and back, cameras. It's certainly a more 'premium' device, with a price that reflects it.

So, if you're on the market for a new affordable Samsung device, or just want to know what the difference is between the A50 and A80, read on as we compare their specs.

Samsung Galaxy A50 vs Galaxy A80 price

The most affordable handset of the two is the Samsung Galaxy A50, which costs $350 / £309 / AU$500. It's a price that straddles the line between budget and mid-range, but it definitely feels mid-range given the specs.

Both handsets have Super AMOLED screens though, with promises bold colors and a high contrast ratio, so in general you'll have a great viewing experience whether you're using the A50 or A80.

One other difference between the displays is that the A50 has a small 'tear-drop' notch housing the front facing camera, whereas the A80 has an unbroken display – we'll get into that later.

While you're getting a USB-C port on both smartphones, the Galaxy A50 has a 3.5mm headphone jack which is missing on the A80, a difference that'll be a deal-breaker if you still love your wired headphones.

Both handsets have Gorilla Glass screens, but while the Galaxy A80 also has this protective material on the rear too, the Galaxy A50 has a plastic body – this is a sign of its more budget design, and it's less protected as a result.

The back of the phone does show the biggest differences between the devices, in fact. While the A50 has its three-camera array vertically down the left, the A80's cameras are horizontal, high up on the body.

The reason for this is because the top of the back of the phone pops up. When you need to take a selfie, the panel surrounding the rear cameras pops up, and then the cameras spin around – it's a fun novelty, and it solves the problem of front-facing camera placement in a unique way.

However we found this mechanical aspect rather dubious, as it seemed frail, and after not much use it started rattling when not in use, so if you want something that'll last a long time perhaps the Galaxy A50 is a safer option.

While both the Samsung Galaxy A50 and Galaxy A80 have three cameras, they're very different in what these actually are.

The Galaxy A50 has a 25MP main snapper, joined by an 8MP camera with ultra-wide lens, and a third 5MP depth sensor.

The Galaxy A80, on the other hand, as a 48MP main sensor joined by the same ultra-wide configuration, and then a Time-of-Flight (ToF) 3D camera, which in effect does the same as the depth sensor but doesn't take its own pictures.

In terms of raw photography then, the Galaxy A80 with its 48MP snapper takes better pictures, but the A50 stands its ground in ultra-wide and close-up situations. Neither phone has a special lens for zoomed shots, though.

On the front of the Galaxy A50 is a 25MP front camera – it's rare for a smartphone to have the same front and rear snapper, and Samsung has likely reasoned that this phone is for people who like to take a lot of selfies.

Of course, the Galaxy A80 has the same front cameras as the rear, since it's the same array – in practice we found that, when you put the camera into front-facing mode, it doesn't have all the abilities of when it's facing back, like Night Mode or zoom, so it's basically just a normal selfie camera.

In the Samsung Galaxy A50 you're getting a 4,000mAh battery, but it's a slight downgrade in the A80 as you're only getting 3,700mAh. Due to the moving rear panel and the larger screen the latter phone also drains power quicker too, so the battery life is much longer in the A50.

The Galaxy A80 does support 25W fast charging though, compared to 15W in the A50, so at least it'll power up quicker.

In terms of chipsets, the Galaxy A50 has Samsung's Exynos 9610 processor, while the A80 has a Snapdragon 730. Both are fairly comparable chipsets, so there isn't a clear champion, but the A80 has 8GM RAM to the A50's 6GB, so you might feel a slight difference there.

In terms of general use, the phones will feel rather similar – they have in-screen fingerprint sensors, run Android 9 Pie with Samsung's OneUI laid over the top, and have 128GB internal memory.

The Samsung Galaxy A80 costs a lot more than the A50, but some might say the difference isn't worth it.

While you're getting more RAM and an unbroken screen in the A80, that's a small upgrade for a phone that's roughly double the price.

The real selling point of the A80 is its pop-up rear camera panel, and if this is an appealing novelty to you, you might find the handset fun enough to purchase.

The Galaxy A50 doesn't have that many ground-breaking features, but it's a reliable phone, and at its price point you could do a lot worse in terms of quiet power.