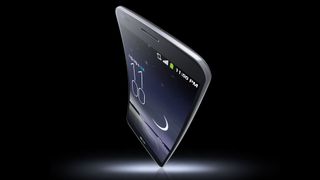 The LG G Flex 2 will reportedly launch in early 2015, with a feature "even more unique than self-healing plastic".

The info comes from @evleaks, and therefore details are thin on the ground. The tipster previously announced that an upcoming LG handset will the be one of the first Android Silver devices, a new initiative to replace the Nexus range.

It's possible that the G Flex 2 and the Android Silver device are the same handset, which could hit the shelves in mid-Q1 next year.

The unusual curved smartphone, although expensive, scored well in our extensive review.

One of the main drawbacks was its 720p screen, which could be upgraded in the next iteration. But a better quality screen probably doesn't constitute as "unique", so what else could it be?

Possibly the ability to bend up to 90 degrees if this story from last year is to be believed, though we're not sure how useful such a feature would actually be.