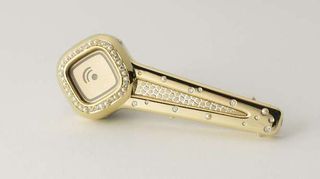 Platronics Discovery Jewel for 50,000 big ones

We're used to seeing Plantronics pushing its Bluetooth headsets at the more fashion conscious end of the market, seeing as its recent release came with a lipstick-style carry case.

But nothing could compare to its latest creation which will set you back a cooler than cool £50,000.

It was showcased to celebs at the MOBO awards in London earlier this month (it's all starting to make more sense now), and was described as a "fusion of technology and fashion" according to Pocket-lint.

Pheobe Coleman, the designer who wants to bling out techno-ears, apparently drew her inspiration for the piece, which has 18k gold, 40 diamonds and 31 natural pearls.

We're struggling to see the laciness of this device, but then we're clearly fashionably backwards.