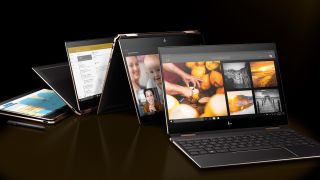 HP has brought the world's first leather convertible laptop to India at an event held in New Delhi on Wednesday. The HP Spectre Folio represents the best of two worlds: 2-in-1 convertibles and notebooks. Alongside, the company has also updated its Spectre x360 lineup with a new and bold design that is surely going to turn heads. The Spectre range of products from HP are easily one of the best in the market and the new additions only make it a more premium series. The Folio convertible and Spectre x360 laptop offer ultra-portability without jeopardizing performance.

Being the world's first convertible PC to feature a handcrafted leather casing, the Spectre Folio does look very premium. The whole body is meticulously stitched with 100% genuine leather casing which makes it feel more like a part of the chassis than just another cover. The Spectre Folio features a 13.3-inch Full HD (1920 x 1080 pixels) IPS touch display with a coating of Corning's Gorilla Glass 4 for added protection. The display allows a wide, 178-degree viewing angle with thin bezels on the left and right side.

The Folio is powered by 8th generation Intel Core i7-8500Y processor and is supported by 16GB of RAM and 512GB of SSD. By design, the Folio does not require a cooling fan inside and due to these measures around 15mm at its thickest.

HP Spectre Folio comes in a Cognac Brown color and is priced at Rs 1,99,990. It is available across offline HP stores starting Wednesday itself.

The HP Spectre x360 features a rather bold design with CNC milled edges giving it a more premium look. The screen is attached to the keyboard via a 360-degree hinge and can be used as a tablet as well. It features a physical privacy camera kill switch which turns off the camera. There's a fingerprint sensor below the keyboard which supports Windows Hello through which users can log in seamlessly. HP SureView is a privacy mode which enables a white overlay on the screen for prying eyes. The Spectre x360 comes in two variants- either with Core i5 or Core i7 chipsets.