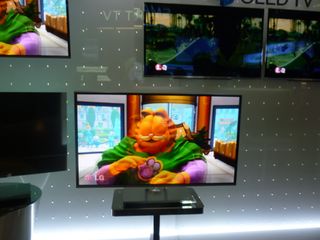 LG has announced that it will expand its OLED television range, with the Korean electronics giant indicating that it will build on the 15 and 31-inch screens it has shown so far.

OLED is still an expensive luxury when it comes to big screens, although it has flourished in the mobile phone world.

LG showed off the world's biggest commercially available OLED television at IFA in 2010 with a 31-inch offering proving a crowd pleaser.

Building on the start

And the company has now signalled its intent to build on that platform and underline its role as a 'recognised sector innovator'.

"LG has built on its previous investment into new and exciting technologies in 2011, with continued development of OLED screen technology," said LG.

"Having launched a revolutionary 15-inch OLED screen to consumers at CES 2010 and then presented the largest commercially available OLED screen – 31 inches – at this year's IFA, LG is set to expand this already impressive line-up in 2011.

"LG's ongoing determination to make OLED technology available to the masses signals its belief in the future of TV design and the breath-taking possibilities yet to come for home entertainment technology."