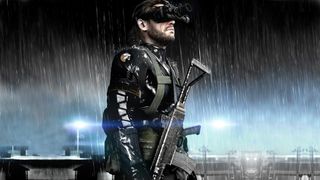 There are few things more evocative to an Englishman/Englishwoman than rain. Almost like that idiomatic myth of the Eskimos having 20 words for snow, your typical bowler-hatted tea-guzzler can reel off at least as many types of rain: from adjectives like drizzle, fine mist, downpour and the refreshingly British "cats and dogs" to the more detailed descriptions, like the kind of rain that seems light but soaks you right through and the sort of rain that splats upon the pavement in thick, wet drops so large you can hear them. Basically, we English people don't like rain - but we know it as well as a sommelier knows wine.

That's why, when games boast of their dynamic weather, our first thought is: rain. It doesn't mean "this game has the potential to produce snow" or "there's a virtual hurricane a'comin'" - few games have ever taken dynamic weather to its extreme - it's usually just another way of saying "watch out chaps, looks like it's about to tip it down."

The upcoming conclusion to the Metal Gear franchise, The Phantom Pain, has reminded me that games have started to master the art of a good shower. There are two main things to think about with rain: the first is the way it changes your mood, and the second is how it changes the world. Linear games have perfected the mood, with titles such as Everybody's Gone To The Rapture and Ocarina of Time using scripted rain as a quick way to set the scene, the former triggering a little drizzle as soon as you enter a caravan park (caravan parks are crap and sad, rain is crap and sad (who needs dialogue when you can tell a story so neatly?) and the latter having Zelda's kidnapping taking place during a storm (storms are bad, kidnapping is bad, and no one can tell you're crying in a storm).

Changing the world is a little different. A good session of rain will turn a sunny day into a dreary one, a picnic into a bunch of soggy adults and sandwiches huddled under a tree, and a nice day at the beach into angry parents and a traffic jam. It's like magic, but the crappy kind of magic that transmogrifies beautiful princesses into belching puddles of mystery goo.

The Witcher uses its dynamic weather system to turn its beautiful open world into a miserable one, with peasants rushing indoors to shelter and Geralt riding around like the world's grumpiest centenarian because monsters don't wait for good weather. The Forza series' rain makes it trickier to drive. Meanwhile in Metal Gear Solid: The Phantom Pain, you have an intelligence team at your base that warn you of dampening skies. Rain means you'll be able to sneak around much easier as your sounds will be drowned out by pounding droplets.

Many video games are about solving puzzles, as well as engendering emotions, and the Legend of Zelda series deserves acknowledgement for this, too - the Song of Storms alone makes an interesting case for rain purely as a mechanic, whether that's to water plants or drain a well. Even more interestingly, the three-day cycle in Majora's Mask has one rainy day, which you must take advantage of to gain access to all the game's secrets - you don't need to water plants on this day, for example. If only rain was that useful in solving everyday problems. Or maybe more of our problems need to be related to filling buckets and growing things...

One of the clear aims of video games in their ever-improving quest for virtual reality is achieving totally believable recreations of the real world. We praise games like The Witcher for its intricate web of narrative and design, and games like Everybody's Gone to the Rapture for its eerily accurate tableau of a recognisable British village.

It stands to reason, then, that weather is part of this quest, and that's why rain has gone from being pixelly blue lines on a black background to something almost tangibly drippy. The perfect in-game rain isn't just about making realistic water fall from some realistic clouds - it's a feeling, a mood, and a suitably grey, dour world to go with it all, and I wonder if games will ever manage to fully capture a bloody good deluge. To paraphrase Bane (whose name sounds like rain, so it's totally appropriate): video games merely adopted the rain. I was born in it.