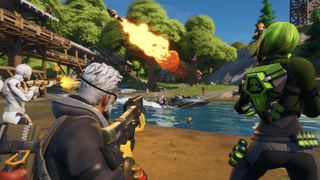 Fortnite will shortly get DirectX 12 support patched in, granting performance benefits (in some scenarios) initially, but there’s also the possibility of ray tracing being introduced down the line.

Epic Games announced that support for DX12 is coming with patch v11.20, which is likely to be delivered imminently given that AMD has already mentioned DX12 support for Fortnite in its latest (only just released) Radeon graphics card driver (v19.11.3).

Online chatter indicates that the update could arrive this week – maybe even as early as today – but whatever the case, it should be soon.

Currently, Fortnite supports DX11, but playing under DX12 should give some PC gamers a performance boost.

As Epic observes: “By using DX12, PC players with high-end GPUs may experience a higher and steadier frame rate. This is because DX12 delivers better CPU performance and allows for the distribution of rendering jobs across multiple cores.”

So in simple terms, the game will be less demanding on the CPU, which should be a major benefit for those whose processor is heavily taxed while running Fortnite. This should really help those with an older (or less powerful – or indeed both) CPU that’s struggling with close to maxed-out usage, as the game will effectively run better, and you’ll see smoother frame rates.

Of course, if you want to use DX12, your processor and GPU will need to support it – in the case of the latter, all relatively modern graphics cards should (GeForce 900 series onwards in the case of Nvidia GPUs).

Also, you’ll need to be running Windows 10 (although Microsoft has been working to help port some DX12 games to Windows 7 – that said, anyone running this OS needs to firmly bear in mind end-of-life is imminent, with all the security perils that entails).

Epic further notes that: “In the future, we plan on adding features to Fortnite that are made possible by DX12.”

So that could mean fancy new visual effects are inbound for the shooter, for those who might want to use them – and even raises the possibility of Fortnite getting ray tracing (via Microsoft’s DXR, as part of DX12). Well, if Minecraft can do it…

The company further notes: “Allowing players to opt into DX12 before these features are added will give us valuable information in our development efforts and help us shake out any bugs.”

In other words, the DX12 option in its initial incarnation will be to test it out – and hopefully help with performance issues as mentioned – before the introduction of any fancy visual whistles and bells.

So you might potentially experience teething problems with the new DX12 feature if you do turn it on, when the patch is made available.

Hopefully any such bugbears would be ironed out in short order, though, and many PC gamers should see some solid performance improvements depending on their exact rig.