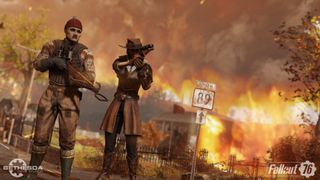 The pre-beta for Fallout 76’s Nuclear Winter mode is going so well that Bethesda has announced it is extending it indefinitely.

In Nuclear Winter, 52 players from Vault 51 are separated by the ZAX computer system into four squads. These squads must fight it out to be the last standing, while a ring of fire closes in around them, all in the hope of finding the next vault Overseer.

Although battle royale gaming is hardly anything new these days, the Fallout universe is one in which, admittedly, a battle royale scenario does make for a reasonably good fit and Bethesda has made an effort to put some distinctly Fallout features into it.

In an official blog post, Bethesda announced it’s been “blown away by the reactions and responses we’ve been seeing all week to Nuclear Winter. It has been so amazing to read all your experiences and see everything you’ve been sharing.”

As a result, the pre-beta of the game, which was originally only supposed to run for a week, "will remain on and continue to receive updates, so keep sharing your feedback.”

This appears to mean that the pre-beta will remain live beyond the free Fallout 76 trial which is currently available until June 17. If you’re looking to test out Fallout 76 for yourself and wouldn’t mind trying a new battle royale mode then now is the time to do it. Any progress made in the trial will carry over to the final game.