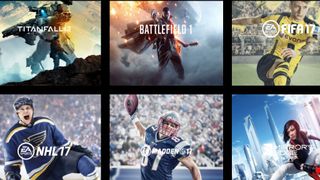 Despite being a games subscription service all about accessibility, EA Access has only now launched on PlayStation 4 consoles – a whole five years after the service came to the rival Xbox One platform.

EA Access contains a huge number of high-profile EA games, with subscribers getting unlimited access to the likes of Anthem, Battlefield V, Dragon Age: Inquisition, FIFA 19, and Madden NFL 19 – without having to buy each pricey title individually.

While Anthem maybe isn't the draw EA hoped it would be – and its battle royal shooter Apex Legends is free-to-play – you're still netting a big potential saving if you're partial to the odd EA title, without being stuck with one game you regret buying.

Other perks include Play First Trials, which give you a chance to play the first few hours of new EA games before having to buy – basically a demo version – and 10% discounts for game, DLC, or cosmetic purchases.

EA Access is pretty similar to Xbox Games Pass, which also allows you to download and play games included in a regular subscription – like a 'Netflix for games' – or Sony's PS Now service, which allows you to either download or stream certain titles for a monthly fee.

EA's platform ships with fewer games, but is also half the price, so is well worth considering alongside the other options.

EA publishes a huge number of AAA franchises and games, including both Fortnite and Apex Legends battle royale games, not to mention the massive FIFA, Madden, UFC, and NBA series.

Some of the games as part of EA Access include:

You won't get all of these EA games on Xbox and PlayStation's own subscription services – unsurprisingly, given EA wants to incentivise you to pick its own platform. So if you're keener on FIFA and Anthem than Bloodborne or Halo, it may make sense to just opt for EA Access to get the titles you want.