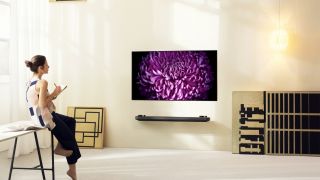 Looking for the best LG TV out there? With a number of knockout OLED and LED sets from the South Korean manufacturer out now – and the rollable LG Signature Series OLED R on its way – answering the question of what the best LG TV is can be tricky.

The past few months testing, prodding, and evaluating the the best and latest LG sets has, however, given us an insight into how the new sets compare to each other. With that in mind, we’ve brought together this guide to the best LG TVs you can buy, whether you’re after a premium OLED TV, a budget alternative, or a straight-up LED set.

If you're reading this guide, you likely didn't find a Cyber Monday TV deal that matched your budget and desires – or just didn't see it in time! But there are LG TVs in all shapes and sizes, at a variety of price points, and year-round there should still be an LG TV suited to you.

The choices below don't feature any highly affordable sets, but you can see more info on low-cost LG TVs in this LG TV 2019 guide. Otherwise, here are the best LG TVs on the market today, and why they might be worth your while.

Why LG over Samsung or Panasonic?

A great question. With so many outstanding TV brands out there, why should you choose LG over the rest?

Firstly, LG has become the poster child for today’s OLED TVs, as a major supplier of OLED panels to its competitors like Panasonic, Sony, or Hisense. While you may like the specific feel of other OLED ranges – Panasonic has a more grounded color palette, while Sony’s Acoustic Surface Audio+ technology emits sound from the panel itself – you’re still in a sense buying from LG.

LG’s OLED sets tend to have a slightly warmer ‘pop’ to colors than some competitors, but the difference is pretty small unless you’re looking for it. But what really marks it out is that it offers the cheapest OLED model in 2019 – the LG B9 – that matches a baseline of quality. While the Hisense O8B can undercut it on price, you’re not getting an experience deserving of an OLED purchase.

Samsung also doesn’t make OLED sets, preferring to push its range of QLED (quantum dot) televisions: ultra-bright LED panels that use a metallic filter to enhance color and contrast without suffering from OLED’s dim output. OLED will, however, be able to reach deeper black levels and more precise light control – down to individual pixels – and both panel technologies have their advantages. You can suss out your preference in our OLED vs QLED comparison guide.

The webOS smart TV platform on LG TVs is also fantastic, with a sleek and polished interface alongside good app support – and voice commands through the Magic Remote for all new OLED sets. Samsung’s Tizen certainly isn’t a slacker, though, and is still one of the best platforms out there.

Keep in mind, also, that LG doesn't support HDR10+, even if it has generally wide support for HDR10, Dolby Vision, and HLG formats.

Can’t make head or tail of all those numbers and letters naming those LG TVs? We don’t blame you – the name structure can be confusing, if necessary for differentiating the huge number of old, new, and incoming sets that LG releases to market. It doesn’t help, either, that each TV maker tends to use different identifiers for their sets.

For LG’s OLED TVs, the structure is slightly easier. Something like the LG C9 OLED will be listed as “LG OLED55C9PUA” – with “LG” obviously referring to the manufacturer, “OLED” referring to the panel technology, and “55” being the model size you’re looking at (55-inch). Most sets will come in several sizes, though 55-inch is the flagship size for most new televisions these days.

Here, “C” is for the mid-range “C Series” of televisions, which sees a new model every year, alongside the budget “B Series”, stylish “E Series”, wallpaper-thin panel “W Series”, and more advanced “Z Series”.

Here's a quick cheat sheet for reading an LG label:

LED sets work a bit differently, though. LG’s LEDs are now labelled under “NanoCell”, rather than “Super UHD”, though they’re still the LED panels LG has been making for years.

So, what is the best LG TV?

You don’t get much classier than this

What marks it out from the rest of the OLED range – the C9 and W9, at least – is the TV design. There’s no bezel here, with a ‘floating’ glass display that feels far more open and unconfined than its hemmed-in siblings. The built-in 4.2 channel speakers also mean you’re getting a wide soundstage and powerful output alongside the pictures onscreen.

Sadly, though, 10-bit HDR10+ isn’t supported here, even if Dolby Vision and HLG are. But it’s a small let-down compared to the dazzling visuals and wide format support the E9 provides.

You may be tempted towards the LG C9 OLED instead, which has the same processor, but ditches the highfalutin glass design for a more traditional appearance – and uses a smartly-shaped TV stand to funnel its downward-firing speakers towards the viewer. But for a real knockout set, the LG E9 won’t disappoint.

OLED on a budget

Can’t afford the E9, or don’t feel like you need a ‘floating’ television to impress your guests? The LG B9 OLED may be the one for you.

The B9 was a bit late to the party, only landing in the second half of 2019, but its low price point compared to the C Series or E Series makes it a necessity in any list of the best LG TVs.

It isn’t the cheapest OLED out there anymore – that title goes to the Hisense O8B – but it’s the cheapest one you can rely on for a baseline of quality, and you really shouldn’t be looking to spend any less on an OLED in 2019 if you want one that works properly.

The lower price comes with caveats, of course: the B9 uses the a7 Gen 2 processor, instead of the more advanced a9 Gen 2 chip, and this means you’re not getting the best picture processing available. But aside from some mild video noise in dark scenes, and the occasional drop in frame rate, you’re still getting a high-quality picture at a (comparatively) cheap price.

What's the best LG TV with an LED panel?

Bright LED pictures, but can it match an OLED?

The old LED panel isn’t dead yet, and LG’s flagship NanoCell TV – SM9500 in the US, or SM9800 in the UK – is LG’s attempt to offer a knockout LED experience for those not sold on the advantages of OLED.

It’s an oddly-positioned model in some ways, given it has a similar price to (and the same processor as) the B9 OLED above, without its level of brightness control or deep blacks – and if anything seems to undermine LG’s confidence in the OLED technology they helped to popularize. We also imagine that if you’re after an LED set at this price range, you’ll probably be making the jump to a QLED in this list of the best Samsung TVs.

This is still a brilliant 4K TV to have in your home, with highly accurate color mapping on a boldly bright screen – treading a line between the tonal strengths of the LG OLED range and the superior brightness of Samsung’s QLEDs. Inevitably some of the contrast is lost on the LED screen, and the lack of an A9 Gen 2 chip means the processing feels sharper in some places than others. But you’re probably better off with the B9 OLED or, if you’re set on an LED panel, a different brand altogether.