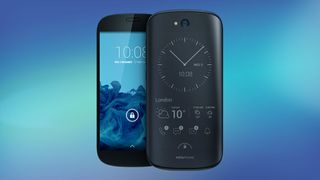 The YotaPhone 2 has an e-paper display on the back

First spotted at Mobile World Congress 2014, the YotaPhone 2 is an odd duck of a smartphone with a double-sided display that makes for some unique features.

And now it's finally launching, first in Europe and then worldwide, with YotaPhone spilling the beans about a December 3 launch on its Twitter feed.

The YotaPhone 2 will be released in Europe this month, followed by other regions - including the US - in early in 2015.

The two-faced phone isn't quite on schedule - it was initially promised for a full fourth-quarter release this year - but late is better than never, as they say.

Has two screens, this phone

The YotaPhone 2 features a 5-inch AMOLED display on its front side and a slightly smaller 4.7-inch e-ink screen on the back.

The rear display works with essential apps like Google Maps, calendar, calling, texts, and others, and displays the time and other alerts in a less battery-intensive format - adding up to 50 hours of extra juice if you use it smartly.