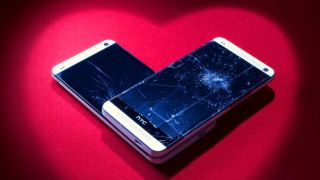 A smashed phone doesn't have to mean a broken heart...

HTC has served up hints that an AppleCare-like protection plan for its range of smartphones will be unveiled this coming week.

In a Twitter teaser on Valentine's Day from the HTC US account, the company posted a photo of two smashed HTC One devices in the shape of a heart.

The accompanying text read: "If only broken hearts were this easy to fix. Details 2/18."

While the optimistic smartphone fans out there will conclude this means the fix will come in the shape of a brand new HTC One 2 (aka M8) on February 18, that's unlikely to be the case.

HTC isn't expected to launch the HTC One 2 until after Mobile World Congress, which gets underway in Barcelona on February 24.

Earlier this week, a company official said invites for the HTC One 2 launch would be going out in a couple of weeks, which puts us post MWC 2014.

The February 18 announcement is just a couple of days away, so we'll bring you anything newsworthy, but don't get too excited ok?