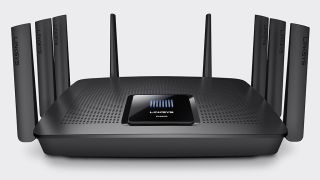 Eager to get ahead of the 4K streaming revolution, Linksys has announced a trio of new Wi-Fi products, led by the first fully functional MU-MIMO AC5400 tri-band wireless router, and accompanied by an AC1900 range extender and a wireless-AC USB adapter.

This holy trinity of networking products can all take advantage of the MU-MIMO (Multi-User, Multiple-Input, Multiple Output) spec which is part of 802.11ac's next generation 'Wave 2' technology.

Extending the range of your wireless network is the Linksys RE7000, which is the first of its kind with MU-MIMO and Linksys' 'Seamless Roaming' functionality which lets it share the same SSID as your router, plus dual-band wireless AC1900 (AC1733 + N300) capability and crossband technology. It'll set you back $199.95.

Linksys' accompanying AC600 USB MU-MIMO adapter (WUSB6100M), which is optimised to work with Linksys Max-Stream solutions, is priced at $59.95, and can be purchased when all three of the products launch this Thursday, July 14.