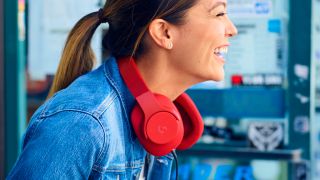 Revealed last month, Logitech G is a new headphone series that aims to provide a listening experience that's advanced enough for pro gamers but also stylish enough to wear on the streets.

While only US pricing and release details had originally been revealed, Logitech has now confirmed that its attractive G433 headphones will be hitting Australian stores later this month, with a suggested retail price of $169.95.

The Logitech G433 Gaming Headset sports a hydrophobic, stain-resistant fabric finish and replaceable mesh ear pads (a second set comes inside the box), and will be available in Royal Blue, Fire Red and Triple Black.

The G433 offers DTS Headphone:X 7.1 sound, giving you an accurate and realistic surround sound experience with true positional audio, allowing you to take in your environment and make it harder for your opponents to get the drop on you. You can also manually tune the volume levels for each of the seven channels.

As the headset is wired, it can be used across PC, PS4, Xbox One and Nintendo Switch. While gaming is obviously a major focus of the G433 headphones, they've been designed for outdoor use, too, with a detachable boom mic and a fashionable style that refrains from the usual over-the-top video game aesthetic found in many competing cans.

Along with the G433 headphones, Logitech has also announced the arrival of its slightly more affordable G233 Prodigy Gaming Headset, which has a soft-touch black and cyan design and is priced at $129.95.