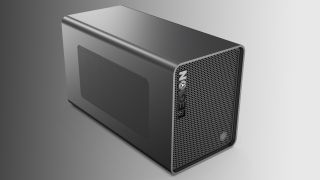 One of the largest limiting factors when it comes to cramming desktop-level power into a laptop is the size of the GPU. An oft-forgotten solution to this problem comes in the form of an external graphics processing unit (eGPU), and Lenovo has just unleashed a new one.

As part of its CES 2020 offering, Lenovo has announced a whole new lineup of gaming kit in its Legion range, including the BoostStation eGPU.

The BoostStation connects to your computer or laptop of choice via Thunderbolt 3 and is capable of supporting a decent range of full-sized GPUs, including but not limited to the GeForce RTX 2080 from Nvidia and the Radeon RX 5700 XT from AMD.

It also has room to house additional storage (either an SSD or HHD with a 3.5” or 2.5” slot) and comes with a host of other ports (HDMI, 2x USB 3.1, 1x USB 2.0, and ethernet), effectively rendering it an external hard drive, dock, eGPU, and power solution all accessible via a single cable to your laptop. It even has a microphone, according to the specs list, although we’re not positive what the use case for this would be.

The Lenovo Legion BoostStation eGPU will be available in the US from May starting at $250 for the unit by itself and bundles will become available shortly after. Pricing and availability in other regions are yet to be confirmed.

Alongside the BoostStation, Lenovo has revealed a gaming laptop to pair with it – the Legion Y740S is an ultra-sleek (14.9mm thin) machine with all the specs you’d need to run the latest games, with the notable exception of a dedicated GPU.

With only an integrated Intel GPU on-board, this means you’ll be fully reliant on some kind of eGPU to play any of the latest gaming titles, but the laptop by itself is more than capable for day-to-day use.

As with the BoostStation, the Legion Y740S will be available in the US from May starting at $1,100 with other regions’ pricing and availability to be confirmed.

Of monitors and mice

Alongside the eGPU and laptop, Lenovo has added three more gaming monitors to its range – the Legion Y25-25, G32QC, and G27c.

These latter two monitors will be available in the US from March, with the G27c starting at $220 and the G32qc starting at $320. Other regions’ availability is yet to be confirmed.

To complete the package, Lenovo has also announced the M600 Wireless gaming mouse, M300 RGB gaming mouse, and K300 RGB gaming keyboard to join in on the Legion lineup. These are all available from June in the US, starting from $80, $30, and $50 respectively. As above, other region’s availability and pricing information is yet to be confirmed.