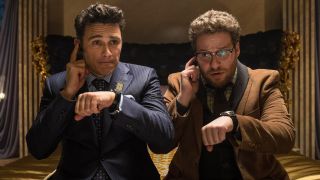 The Interview may well go down in the history books as the movie that sparked a third world war, but before that happens Sony can celebrate that it's a box-office success - despite only being released online.

Box-office returns have revealed that the movie made a decent $15 million in revenue from its its few days on the internet.

The film was released on Christmas Eve in the US and Canada - through Google Play Movies, YouTube and Xbox Video - and landed on iTunes yesterday.

According to Sony, the $15 million is a combination of rentals and people who bought digital copies, which is great news but there is still no word on a global release of the movie.

Given its limited release, The Interview became an inevitable pirate hit too. Torrent Freak reports that the movie has been illegally downloaded some 1.5 million times.

If only Sony had decided to release the film on a global scale, it could well have had a massive hit on its hands and properly showed off the virtues of day and date releases in both cinemas and in the home.

Well, when we say global - everywhere but North Korea obviously.