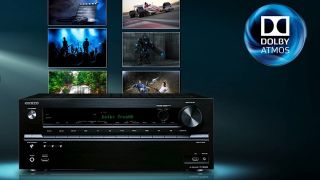 Anyone who's experienced the groundbreaking cinematic sound of movies like Gravity at a theater has probably wondered when such technology would be heading to the living room. Wonder no more, folks. That day is coming soon.

Dolby announced its ear-splitting Dolby Atmos, first introduced in 2012, will be making its way to home theater systems later this summer thanks to a handful of AV hardware partners.

The launch is the result of months of work by Dolby's research and home theater teams. The Atmos promise is to help consumers "feel every dimension of your home entertainment," courtesy of 9.1 surround sound.

Onkyo plans to be first out of the gate with Dolby Atmos support for its upcoming TX-NR1030 and TX-NR3030 network receivers as well as the PR-SC5530 Network A/V Controller, a pair of "home theater in a box" systems and new speaker packages.

Better yet, Onkyo plans to release a firmware update in September that will enable Dolby Atmos on existing midrange TX-NR636, TX-NR737, and TX-NR838 receivers, no new hardware required.

Also planning new hardware releases between late summer and fall are Pioneer and the D+M Group (via Twice.com), which will be launching Denon and Marantz-branded audio components capable of 9.1 surround sound.

Dolby claims existing players that "fully conform to the Blu-ray specification" will support Dolby Atmos content, which is expected to launch on select discs and streaming services this fall. A wider launch is expected in early 2015.