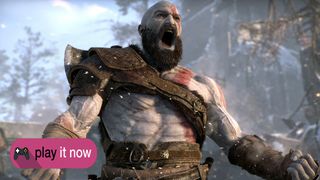 It's been many, many years since Kratos exacted bloody vengeance on the Gods of Olympus for tricking him into murdering his own family, and he's changed in quite a dramatic way.

When we catch up with him in 2018's God of War, SIE Santa Monica Studio's simultaneous continuation and reset of the beloved PlayStation series, the Spartan warrior has left Ancient Greece behind and is now living a new life with another family in the Norse realm of gods and monsters.

But it's not just the Norse mythology setting that sets the new God of War apart from previous entries in the series — its action-focused gameplay has been completely deconstructed and reimagined, offering a new over-the-shoulder camera perspective and an axe-based combat system that keeps Kratos mostly grounded.

He's also got a companion along for his latest adventure, with his young son Atreus providing backup with his trusty bow and knife during combat, while also deciphering Norse text and helping out with puzzles.

Alas, this father-and-son relationship is a complicated one, with Kratos' secrets about his true nature (as well as Atreus' looming godhood) keeping the two at odds with each other for the majority of their adventure.

The new game opens with the Norse funeral of Kratos' late wife, Faye — an event that seems to herald that his brief period of peace is coming to an end. He's now been left to raise Atreus alone.

The problem, as we alluded to earlier, is the father and son are not particularly close — both Kratos and Atreus resent their new living situation, but must journey away from home to carry out Faye's final wish, which is to have her ashes scattered at the highest peak in all the realms.

While he's still the grumpiest guy around, it's safe to say that Kratos is significantly less full of rage than he was during his time in Ancient Greece — he's no longer prone to killing everything in sight, and when he does raise his voice, it's usually because Atreus has failed to obey his commands.

This father and son duo is bound to draw comparisons to Joel and Ellie from Naughty Dog's 2013 masterpiece, The Last of Us, with Kratos and Atreus sharing a similar dynamic of the mournful protector and the innocent child who just might melt his icy heart.

Don't get us wrong, though — this is a very good thing. It's a maturation of character and tone that helps take the series to new emotional levels, making for a deeper, more satisfying overall experience.

You better axe somebody

As Kratos and son prepare to set off on their journey to the highest point in all the realms, they're paid a visit from an stranger with god-like powers (whose identity is discovered later in the game), who proceeds to give Kratos an unexpected challenge in the fisticuffs department.

After one of the most brutal and cinematic battles of the entire God of War series, it becomes clear to Kratos that the Norse gods know all about his past as the Ghost of Sparta, and are quite threatened by his god-killing track record.

This puts the Spartan on the defensive — a position he doesn't usually find himself in. All of Kratos' previous adventures placed him in the role of aggressor, seeking vengeance for the wrongs that had been committed against him, but now his only concerns are carrying out his late wife's dying wish and protecting his son.

Thankfully, Kratos has inherited Faye's hefty Leviathan Axe, a powerful ice-based weapon that can be used in close-quarters combat and thrown for ranged attacks. You'll spend most of the game wielding it, although you do get to play with an alternative fire-based weapon later on.

Time to throw down

Perhaps inspired by the likes of Dark Souls and Bloodborne, the new combat system's quick and heavy attacks are mapped to the R1 and R2 shoulder buttons, with added functionality granted while holding the aim button (L2).

This will throw your axe at enemies or interactive puzzle elements throughout the world. At times, that means leaving it wedged in a cog that's keeping a platform raised while you fight with your fists and trusty shield, which is raised by pressing L1 (hitting that at the right time will deflect an enemy's attack, leaving them open for a counter move). Pressing the triangle button will return the Leviathan Axe to you in a Mjölnir to Thor-like fashion.

Aiming at an enemy and pressing the square button will cause Atreus to shoot arrows for your — an invaluable tactic later in the game when the bow is powered up with numerous magical abilities.

Like FromSoftware's aforementioned titles, the combat in God of War usually has you locking on to one enemy at a time by pressing in the right stick (R3) and dodging enemy attacks with well-timed rolls by double-tapping the X button.

Thankfully, the combat, though occasionally tough, is much more accessible than it is in the Souls games; this is still a God of War title at heart. As you level up and upgrade your abilities (spending XP will grant you new attacks, just like previous games in the series), weapons and armor (applying rune stones will grant you magical attack abilities and spending hacksilver will buy and upgrade Kratos and Atreus' armor, axe and bow), you become more formidable, able to take on multiple enemies at once.

In stark contrast to the mostly-linear nature of previous God of War games, this iteration takes a page out of the Tomb Raider reboot playbook, giving you a much larger environment to move around in without going all the way into sandbox territory.

In true Metroidvania fashion, certain areas, items and pathways are initially blocked off to Kratos and son, opening up only after you've unlocked the requisite new ability or weapon which allows you to break through previously unbreakable barriers.

Yes, that does mean there's a fair amount of back-tracking involved throughout the game's roughly 30-hour length, and that playtime will be further extended if you stray from your mission and start taking on the occasional side-quest or decide to track down specific items scattered around the different realms.

Yes, you read that correctly — this new God of War journey will take you through multiple Norse realms, each with a distinct look and feel. One in particular ranks among the most beautiful environments we've ever visited in a video game.

An encounter with a friendly witch early in the game grants you a 'Witch Compass' — an invaluable item which will always point you in the direction of your current objective, meaning you'll never get lost on this epic adventure. This compass becomes especially useful when travelling around to different areas within each realm via canoe.

In fact, despite his generally sour attitude, Kratos makes a number helpful friends throughout the game's campaign. That includes a pair of bickering dwarf brothers, a knowledgable talking head (just go with it) and the previously mentioned witch. Though he's always surly, Kratos is always respectful to his allies, which goes to show how much he's calmed down in the years since the conclusion of God of War III.

With astonishing art direction and incredibly detailed graphics, God of War ranks among the very best looking games on the PlayStation 4 — in fact, we'd go as far as to say that it's the prettiest PS4 game since the visually-astonishing Horizon: Zero Dawn by Guerilla Games.

Its immense scope is backed up by unrivalled lighting effects and a remarkable level of detail in costumes, faces and environments — all of which are dialled up to new heights when played on a PlayStation 4 Pro console.

The PS4 Pro version of God of War offers two graphics modes: one which favors resolution, displaying the game at checkerboard 2160p (or 4K), and another which favors performance, lowering the resolution to 1080p but displaying at a framerate that's closer to 60fps (but never actually locking at it).

The one you choose will obviously come down to your personal preference. Camera movement is much, much smoother in performance mode, though the drop in visual detail is noticeable — especially in game, where the level of detail seen at 4K is so high.

Of course, HDR is also available for those with TVs that support the format, and we can say that it definitely adds to the experience, particularly when it comes to lighting and shadows.

And the cat's in the cradle and the silver axe

Of course, the best visuals in the world don't mean a lot without a compelling story behind them, and with God of War, creative director Cory Barlog and his team at Sony Santa Monica have definitely achieved their best narrative to date.

Though Kratos can be incredibly gruff to his son, and Atreus can enter into insufferably annoying brat territory from time to time, their relationship provides the anchor to the whole experience.

Even when God of War is at its biggest and most spectacular, you never forget the grieving father and son at the center of it all. There's something incredibly emotionally satisfying about witnessing the unspoken love between Kratos and his son grow over the course of the adventure.

Of course, that's threatened a few times by Atreus' childish behavior, often bringing the pair almost back to square one in terms of their tolerance of one another, but thankfully, the game has a way of always steering things back on course.

The new God of War isn't just the best game in the series to date because of its redesigned combat system, updated camera, epic scope and incredible visuals. Like its characters, it reaches such incredible new heights because of the inclusion of something that none of the previous titles in the series really had much of — heart.

This version of Kratos finally feels like a fully-developed character — one that's less of a one-dimensional rage monster and more of a deep, thoughtful soul who's still harboring a lot of pain and anguish.

With Atreus by his side, the game gives you constant hope that Kratos will eventually leave behind the baggage that still haunts him (and we mean that literally — Kratos is visited by ghosts from his past on more than one occasion).

Though it was once hate and anger that fueled Kratos' desire to fight, he now fights out of love, which is a huge departure in tone for the series — and ultimately transforms it into something more powerful, poignant and unforgettable.