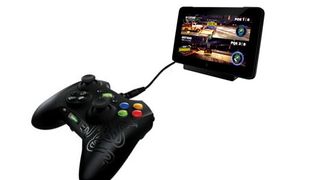 Razer may have taken its first foray into tablets with its Edge, but the gaming hardware giant has no plans to head into the phone world.

Speaking to TechRadar at E3, Razer CEO Min-Liang Tan explained that the minimal screen size was a compromise too far.

"One of the common questions I get all the time is are we building a gaming phone," he said

"I really think mobility is important - but to sacrifice quality of gaming, I don't think that's something our customer base is happy with."

So what does Tan believe is a good game for a phone? He's a little embarrassed to say...

"I play a lot of mobile games. Embarrassingly enough, I play Candy Crush. I'm going to lose some street cred, but I play some Candy Crush and all that kind of stuff.

"But it's just not as engaging as a World of Warcraft or games like that.

"So I don't think it will ever replace what we're doing, until such a day comes when we're able to have cloud gaming, or stream it across to a smaller device and keep that quality and that level of engagement."