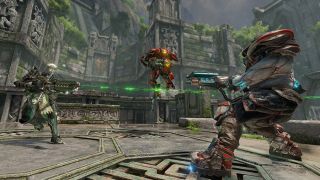 Bethesda has been busy showing off Quake Champions, with the first gameplay video being revealed over at QuakeCon 2016.

Of course, this follows the reboot of Doom which went down very well – multiplayer aside, that is, and hopefully that's where Quake Champions will redress the balance.

The video clip shows a game which returns firmly to Quake III Arena (Q3A) roots in terms of the look, levels and the gameplay. So we are talking towering levels which you bounce around, with rocket-jumping and jump pads aplenty. Zebedee would be entirely at home.

So there's fast-paced action aplenty with the emphasis on pure deathmatch, or as the trailer puts it: "Pure speed, pure skill, pure FPS."

Anarki in the UK

Tim Willits of id Software was on hand to give out various details on the game, and show off a couple of new 'champions', including Anarki, the hoverboard riding maniac from Q3A. There will be a selection of at least a dozen champions that players can choose from in the closed beta, each with their own unique abilities.

However, Willits was quick to point out that there won't be any load-outs or limits to the number of weapons you can carry. He said: "Time the weapon pickups, or kill your opponents. That's how you get weapons in a Quake game."

And tomorrow night, at the QuakeCon Finals Party, a number of gaming pros are going to engage in a public exhibition match – and that should be very interesting viewing indeed.

Expect the closed beta for Quake Champions to kick off in 2017, but meantime, watch the initial trailer for the game in all its glory (or all its 'gory', rather) below…