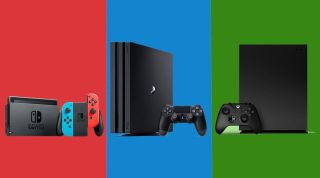 It’s been a heck of a year for videogames. We’ve navigated the ruins of Greece, trekked through ancient Midgard, ran down trains in the wild west and even raced through the cobbled streets of Britain. But which games have really stood out to us this year?

It’s been a hard task, but the TechRadar team has put their heads together and thrashed out which games we believe were the best this year. At times it got vicious and downright dirty, but we did it for you. So without further ado, here are TechRadar’s games of the year.

Think you know Tetris? Think again. It’s been re-invented many times over the years, but by bringing the game into the realm of virtual reality, Tetris Effect is revelatory.

Taking its cues from the VR port of Rez, Tetris Effect magically pulls together astonishing visual effects and an incredible soundtrack to make Tetris a multi-sensory experience more closely akin to a rhythm action game. It’s a joyous addition to the PSVR’s growing library.

We know Pokémon Go didn’t release this year, but the mobile game showed no sign of slowing down in 2018 - if anything it’s getting even bigger.

With the release of Pokémon Let’s Go Eevee/Pikachu, players now have even more versatile ways to play Go. Not to mention the continually popular community events, the release of the Trainer Battles feature and the unveiling of the mysterious Meltan. We will be trying to catch them all for a while yet it seems.

There wasn’t a huge amount of hype about Hitman 2 before its release but, much like Agent 47 himself, the game sneaked up on us.

Although Hitman 2 doesn’t do much to drastically change the series’ formula (except for the introduction of multiplayer Ghost mode), we found that that’s precisely what we love about it - plus, assassinating drug lords in Colombia with poison is always a recipe for a good time.

If Batman Arkham Asylum proved that superhero games could not only be good, but be great, Marvel’s Spider-Man showed that they could rival the big-screen adaptations of our comic book heroes too.

Dazzlingly pretty, wonderfully fun and full to the brim with jaw-dropping moments that would make the late Stan Lee proud, ol’ webhead had a truly great adventure this year.

We’ve come to expect a certain calibre of game when it comes to the Assassin’s Creed series: history, assassinations and a stunning open-world to explore. Assassin’s Creed Odyssey does not disappoint on any of these fronts, providing a vast environment and tantalizing story that truly captures the essence of Ancient Greece.

Also, you can finally play as a female lead character in a game that will keep you busy for at least 100 hours. Talk about value for money.

So, here’s the thing – Fortnite actually released back in 2017, and got off to a shaky start as it focused on its base-building, AI-wave battling campaign mode. No-one really cared all that much, but developer soon started turning its attention to the free Battle Royale mode of the game it was offering all players. And, over the course of 2018, it became a phenomenon.

It’s improved dramatically over the past year, and has grown to become one of the most popular games, well, ever. Find us a kid that isn’t playing Fortnite, and we’ll show you a kid that doesn’t like playing online games with their pals. And so, it would be impossible to crown any other title king of the online multiplayer hill this year.

Forza Horizon 4 is undeniably stunning, letting you race through the winding countryside and cobbled cities of Great Britain. However it’s not just the graphics that made Forza Horizon 4 our favourite sports game of the year.

Playground Games’ series continues to push the limits of the racing genre - creating an open-world racing title like no other.

It’s been quite a year for fighting games but there’s only one that we felt deserved the title of the best: Super Smash Bros Ultimate. We’ve been waiting for Ultimate since Nintendo announced it at E3 2018 and it certainly didn’t disappoint.

The Ultimate roster includes more characters, stages and modes than ever before, and finally introduces an online competitive mode. Nintendo have even promised more characters are on the way. It’s not hard to see why Super Smash bros Ultimate is our King of the Ring.

Red Dead Redemption 2 was arguably the biggest, and most eagerly anticipated, game of 2018. Sometimes boarding the hype train means that you’re greatly disappointed when the title releases and you need to disembark, but luckily this wasn’t the case with Red Dead Redemption 2.

Not only did Red Dead 2 look spectacular but its intertwining emotional storylines (and side quests) had us deeply invested in Arthur Morgan, the Van Der Linde gang and the changing west. We don’t want to spoil anything, but have some ice cream ready to fill the void Red Dead will leave when you finish.

Overcooked cemented its place as a much-have party game when it released in 2016, so it’s no surprise Overcooked 2 followed suit. Introducing more characters, more madcap levels and new recipes, Overcooked 2 has built on what the chaotic game so much fun - absolute anarchy.

Overcooked 2 may have destroyed office friendships but we feel that it’s completely worth it.

A spiritual successor to Theme Hospital, Two-Point Hospital injected us with nostalgia and dosed us up with tongue-in-cheek humor. The hospital sim proved a hit among newbies and old hands, with its chaotic characters and illnesses such as Bloaty Head, Mock Star, and Jest Infection. It’s a modern twist on a classic and we can’t get enough.

Honorable mentions: Celeste and Into the Breach.

Game of the Year

It was a hard one to pin down, and Red Dead Redemption 2 almost had it, but we decided that God of War was our deserving winner of Game of the Year. Between the emotionally captivating relationship between Atreus and Kratos, powerful visuals, intriguing mythological world and action-packed combat; it’s hard to pin down what it is we value most about God of War.

Although God of War’s gameplay strays from its predecessors, we felt that the heart of the series’ newest addition made it truly spectacular.

We’ve been spoiled by ProjektRed’s Witcher RPGs over the past decade, but with Geralt’s story coming to an end, it’s time for something new. Cyberpunk 2077 looks set to take the free-roaming, narrative-heavy direction of the Witcher series, but thrust it into an all-new first person futuristic world.

Imagine a BladeRunner film that you can play, and you’re pretty much there. We’re incredibly excited about Cyberpunk 2077… but will we really see it in 2019? It seems so ambitious, we’re starting to think this one may be destined for the Xbox Two and PS5 of the future.

Honorable mentions: The Elder Scrolls 6 and Ghost of Tsushima.