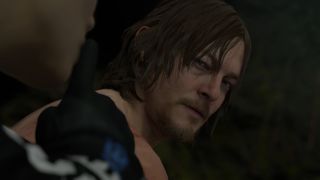 In case you’ve been living under a rock for the last couple of years, Death Stranding is the latest project from acclaimed video game auteur Hideo Kojima. The mastermind behind the Metal Gear franchise left Konami in 2015 amid acrimonious circumstances, before reforming Kojima Productions as an independent venture.

What’s so interesting about Death Stranding is that no one seems to know exactly what it’s about - except Kojima of course. While the game has been shown at various shows and expos since its initial unveiling as a PlayStation exclusive at E3 2016, these demos and trailers have all formed a series of seemingly disconnected vignettes. Babies in jars, shadowy creatures, undead soldiers and Norman Reedus traversing snowy mountains? It’s all a bit confusing.

After months of speculation, last week we finally got a lengthy nine minute trailer which shows plenty of new footage of Death Stranding but still poses plenty of questions.

We now know the game will launch on November 8, 2019, who the cast are and a few more jumbled plot tidbits, but here are some more questions we’d like answered before the game’s release.

What's with the babies?

Since it’s initial reveal, this question has been on the minds of many - and we still don’t have a definitive answer just six months before launch. Kojima has stated that the “baby relates to game mechanics as well as the story as a whole”, and it’s been seen being held in a container by Guillermo Del Toro as well as inside Norman Reedus’ oesophagus - yes, really.

Could it be as simple (and dark) as the baby acting as your health bar? Or is the baby key to the game’s plot about jumping between time zones, allowing our protagonist to jump between realities and dimensions? At this point, it’s anyone’s guess, but we’re certainly itching to find out.

Where will we be time traveling to?

One of the most exciting elements of Death Stranding’s pre-release material has been the notion of time manipulation. One of the game’s earlier trailers demonstrates a phenomenon called “time fall”. Appearing as rain drops from another dimension, it can age people and other living organisms rapidly, posing plenty of hypotheticals - will we visit other time periods?

One section of the trailer seems to show what looks like World War I combat, albeit with some strange inconsistencies suggesting all is not right in this scene (aside from the war, of course). While this could be a hugely distant flashback, it seems unlikely. Will we see more time periods explored, and how will these connect to the game’s open world?

What is there to do in the open-world?

Speaking of Death Stranding’s open-world, Kojima has some experience in this field. Metal Gear Solid 5 may not have tied that franchise’s story up in the way that fans had hoped, but it did transplant the game’s signature style of stealth action gameplay to an open world setting while encouraging experimentation.

With Death Stranding, it seems Kojima Productions is pushing the boundaries of exploration. While lead character Sam Bridges is tasked with delivering supplies, it seems hard to imagine the entire game will be a simple fetch quest. Expect combat against strange monsters called “Beached Things”, as well as the ability to explore mountains, canyons, and everything in between. It’ll be interesting to see how populated this region is, as trailers have suggested there’s not a lot of other characters to be found.

Death Stranding’s ominous promise that “every death carries a consequence” is likely to have you avoiding combat in some small part as well, so try not to kill every weary traveler you come across, OK?

What benefits will multiplayer offer?

One of the more tantalizing threads (and there are many) about Death Stranding is Hideo Kojima’s insistence that the game features multiplayer, and thanks to a recent press release we have some more details on how it’ll work.

Multiplayer will be asynchronous, and will allow players to support each other by sharing supplies and pointing out safe areas. It’s a far cry from Metal Gear Solid 5’s base-storming player-versus-player, but what has us really intrigued is the potential for how progression will work. Will sharing supplies benefit your campaign? Will “walking in the footsteps of fellow couriers” (as per the press release) change the way the story plays out?

For a game with such lofty goals of reuniting a broken civilization living behind walls, it seems likely there’s more to this resource sharing than Kojima Productions is letting on. Hopefully we’ll know more before launch, and hopefully your friends list is full of generous players.

Will we see cross-generation launch?

On the subject of launch, it’s no secret that we’re approaching the twilight of the PlayStation 4’s incredibly successful life cycle. Sony are now discussing the next-generation in everything except the name, which is incredibly exciting but potentially problematic for a huge exclusive like Death Stranding launching near the end of the machine’s run.

Sony is no stranger to releasing incredible swan songs, however. God Of War II hit the PlayStation 2 when the PlayStation 3 had already launched, and that console received The Last Of Us shortly before the launch of PlayStation 4.

While all signs point to the next console being backwards compatible with PlayStation 4 games, will we see a sparkly, brand spanking “remaster” of Death Stranding on the PlayStation 5? Who knows, but with the game being developed on Guerilla’s Decima Engine it seems fairly likely it’ll be scalable across hardware generations.