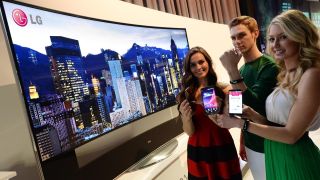 Whew! Had a chance to breathe this week? We sure haven't.

The book is closed on CES 2014, the wildest, awe-inspiring-est tech show of the year. We saw just what the brightest minds in the biz can cook up. From the latest in wearables, a bakers dozen of Steam Machines, quite possibly the future of automobiles and everything in between - we even had a few hours to throw a massive party.

To find out the best of the best from the show, check out TechRadar's Best of CES 2014 award winners, and read on for the top 10 moments from the Vegas bonanza.

Got a favorite CES 2014 moment? You know we'd love to hear from you in the comments section below.

If you're still hankering for more from the show, we've added a post-CES section at the end of the page where you can find the last bits of news and hands ons all in one handy place.

Michael Bay didn't need giant robots to hold the CES audience's attention. After he lost the timing on a teleprompter and fumbled his bit about Samsung's 105-inch curved 4K TV at the company's January 6 press conference, it was all anyone could talk about.

The names aren't terribly illuminating; in fact the range is getting pretty confused. Just know that these jumbo tablets use all that screen space to run several apps in multiple windows, aided by performance from 3GB of memory. And it's the Note that comes with the S-Pen, and even has a compatible mouse, sold separately.

Honestly, we do feel bad for Bay, who walked off stage with his head hung like Charlie Brown to sad piano music. Obviously improvisation isn't his strong suit. Samsung, maybe Judd Apatow would be a better choice for CES 2015?

With Valve's 13 hardware partners for its Steam Machines initiative unveiled, we saw a number of interesting designs and configurations. However, we're still no closer to an idea of how PC gaming's move into the console space will pan out.

We're just as excited about the potential (or novelty) of Steam Machines as we came into CES, but now comes the time to prove the concept. How will the rest of gamers feel, and how will the hardware vendors – not to mention the game developers – make Valve's SteamOS an attractive alternative?

The future is potentially very bright for the new hardware - just ask Razer CEO Min-Liang Tan - but 2014 is going to be a colossal year for Steam Machines and for Valve. CES was only the beginning, and these new gaming entrants have a fascinating road ahead of them. We can't wait to go along for the ride.

Sony purchased Gaikai well before the PlayStation 4 was unveiled to the public, and kept mum as to its plans for the video game streaming service for an impressive amount of time.

It waited until this year's CES to push PlayStation Now into the limelight. The service, which looks to be a hybrid of GameTap and HBO GO, will let gamers stream a selection of PlayStation 3 titles to their PS4, PS3 and even Sony Bravia TVs, no console needed.

It may be called Now, but release date, pricing, actual library and when the PS Vita will get some love are coming later. Sony wouldn't even confirm the availability of The Last of Us, Puppeteer, Beyond: Two Souls and God of War: Ascension, the games we played on the show floor.

Maybe too big. Razer's concept for a 100% modular gaming PC isn't even a complete idea, and already it managed to steal a bit of buzz from Valve's legion of Steam Machines.

We clamor for a future of literally plug-and-play PC gaming, but Project Christine raises a lot of questions. Is Razer the company to finally make it happen? Do we even want it to be Razer? And are the component vendors even interested in such a thing? We hope to get those answers in 2014.

Though the VR goggles aren't even released to the public yet, the Oculus Rift is managing to improve by leaps every time we test a new version. The latest prototype – the Oculus Rift Crystal Cove (named for a state park in Southern California), totally blew us away during our third hands on session with the headset.

The addition of positional head-tracking creates a more immersive experience because full movements of the wearer's upper body can now be detected. The complaints of motion sickness led the team to implement low persistence, which reduces the blur-induced nausea.

This version of the Oculus has us pining for the consumer version even more strongly - if that's possible - but sadly there's still no official release date or pricing.

T-Mobile US CEO John Legere was up to it once again, making major waves outside the show floor.

Legere found himself, ahem, escorted from prime punching bag AT&T's private party early in the week. He attended because he wanted to hear Macklemore (or so he said), but we're sure the outspoken, pink T-shirt-wearing exec had other motives in mind.

That really set the mood for what else T-Mobile had in store at CES. During the conference, Legere announced that T-Mobile will start paying the early termination fees of anyone switching to T-Mobile from Verizon, Sprint or AT&T. It will fork over up to $350 (about £212, AU$389) to cover the ETF, plus an extra $300 (about £182, AU$333) device credit.

This wraps up the carrier's Uncarrier initiative nicely. No there are no contracts, no gouging on international usage and an easy system for switching to new phones every year, plus the ETF credits.

Legere really cemented himself as a no-BS, no-holds-barred CEO at CES, and we are pretty impressed by it.

In an industry where everyone is trying to outdo one another with bigger numbers, Nvidia shot to the top of the ranks with its new Tegra K1 processor.

The 192 cores alone are a giant step above the Tegra 4's 72, signaling that Nvidia is positioning the K1 as the next-next-gen of graphics processing silicon. We'll have two versions - a 32-bit quad-core 2.3GHz and "Denver" dual-core 64-bit 2.5GHz variant - at launch later this year, and with claims the new Tegra is more graphically powerful than the Xbox 360 and PS3, we think the chip is poised to take mobile gaming to a brand new stratopshere.

We finally (finally!) got the chance to go hands on with Valve's Steam Controller at CES. Take that, 300 beta testers.

We found it insanely light, impressively precise and uniquely creative, but the question remains; can it ever stack up to a mouse and keyboard?

Two Valvers told us that for hardcore, competitive gamers, controller precision will probably never match a mouse and keyboard. But for the rest of us? The gamepad may be just fine.

Though tech you wear on your wrist has been on the scene for a while now, the sector truly took CES 2014 by storm.

From the Razer Nabu to LG Lifeband Touch to the Sony Core, the options are rising for users to essentially pick whatever fitness tracker fits their needs. The same goes for smartwatches. With the newest iteration of Pebble in the form of Steel, it seems this time piece gang is finally figuring out that in addition to functionality, aesthetics are important for consumers.

There were plenty more wrist wearables on display than we've listed above but the message at CES was clear. Companies big and small are diving into the tech, consumers are no longer limited to a select few, and this sector is poised to get even bigger in the coming years. Five CESes from now, will we look at 2014 as a turning point for smartbands and smartwatches? There's a very good chance the answer will be "yes."

Straight from the head of Sony Mobile Europe's mouth to TechRadar: The hardware maker is still in active discussions with Microsoft to launch a Windows Phone.

What does this mean, Sony and Windows Phone fans? That the former isn't interested in being stuck on a single OS, that's what.

The talks are still tentative, but the word from Pierre Perron shows Sony is at least considering a Windows Phone comeback, and that's quite a coup for Microsoft's system. It's been growing, and adding another manufacturing partner (sorry, Nokia) could mean much for it moving forward.

Post-CES news to check out:

We didn't want you to miss out on everything else we've uncovered from Vegas, so click on to learn more about the weird and wonderful tech to keep you satiated until CES 2015.