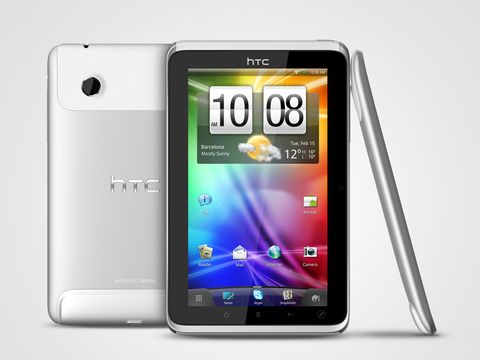 A decent, but certainly not excellent tablet. For pen lovers only

HTC has always stood out among the raft of Android phone manufacturers. The company's been partnering with Google since the start, but still forges its own style, which has won it a lot of fans.

Now that Android is a major tablet OS, with Android 3.0 appearing on the likes of the Motorola Xoom and Samsung Galaxy Tab 10.1V, HTC is still staying separate from the crowd.

The most notable change from the norm is the 7-inch screen and the touchscreen stylus, known officially as the Magic Pen. It connects wirelessly to the Flyer, and enables you to annotate, highlight and erase in supported apps. It offers a measure of pressure sensitivity (unlike most styluses on capacitive screens), so may pique the interest of artists.

Instead of Android 3.0, the Flyer uses Android 2.3.3, skinned with HTC's familiar Sense UI. In this case, it's Sense 2.1 for Tablet. We'll go into more detail about exactly what that means on the third page, but for now we'll just say it's HTC's way of trying make a version of Android designed for phones work a little better on larger screens.

Instead of the dual-core processors that have quickly become the standard for new tablets (particularly Nvidia's Tegra 2), HTC has gone for a single-core processor with a higher clock speed. The CPU is paired with 1GB of RAM, so there's great potential for multitasking.

There's a five-megapixel rear camera, as well as a 1.3MP front-facing camera. Both are capable of recording 720p HD video footage.