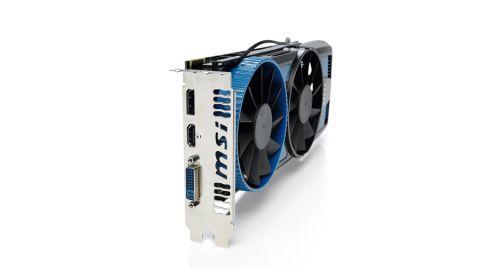 This is as good as it gets if you're looking for a genuinely gaming-capable card at the sub-£100 level. Granted, it's only just under £100, but compared with the competing GTX 650, at this price point it's the gamer's only real option.

Heaven is a great metric for comparing GPU performance in isolation of any marketing nonsense, or any company specific extras, and the figures don't lie.

The HD 7770 is considerably faster than the GTX 650 in Heaven 3.0 with only Batman: AC actually giving any parity of performance between the two cards. Across all the other benchmarks, whether at 1080p or 2,560 x 1,600, the AMD graphics card has a pretty significant advantage.

When you look at the different GPU architecture it's easy to see why. The Cape Verde XT GPU of the HD 7770 has far more shaders on offer than the GK107 GPU at the heart of the GTX 650. Despite the fact they both have the same size frame buffer, similar clockspeed and number of ROPs, the extra Radeon Cores of the Cape Verde XT push its gaming performance numbers far ahead of the competition.

The HD 7770 is such a capable performer it's knocking on the door of the GTX 650 Ti, even the AMP! edition we're featuring here from Zotac. That's probably where Nvidia saw the matchup in the first place, but pricing and AMD have conspired against it.

While you're not going to be topping 30fps at 1080p on the top settings, you won't have to sacrifice too much of the pretties to be able to hit that magic frame rate.