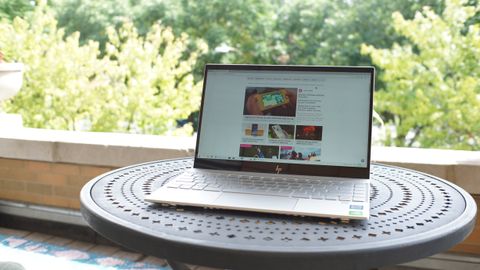 The HP Envy 13t, as we have it configured, is on the beefy side for an Ultrabook. The Intel Core i7-8565U offers strong performance matched with efficiency, and the GeForce MX250 graphics processor gives it a serious boost over similar machines with Intel’s integrated graphics, though itself definitely not enough power for AAA gaming.

In our day-to-day use, the Envy 13t easily keeps up with our demands. Four cores of computing power is plenty for most tasks, and with the headroom to boost clock speeds up to 4.6GHz, it can burst as needed. This keeps the laptop feeling snappy, with programs launching quickly and some simple tasks, like basic photo editing, working fast.

With thin-and-light computers, thermal management is always something to watch out for. Two computers with the same processor can have fairly different performance because of their design, and we see that here. The Envy 13t earns strong marks for single-core performance, with a GeekBench score of 5,255 that gives it a slight lead over the Dell XPS 13. But, we see regularly see inconsistent multi-core performance in both Geekbench and Cinebench. Our first run through of the benchmarks saw the Envy 13t score significantly lower than the XPS 13 with the same processor.

Curiously, we repeated some of the same tests later just incidentally in front of a fan, and got dramatically improved results. In one GeekBench test, the Envy achieved a multi-core score of 16,103, well above its own score and above the average of the XPS 13, and it also managed to double its CPU score in Cinebench. (We also tried some of the tests over with HP Command Center set to maximize fan speeds for performance and saw no difference). We repeated the benchmarks again later to get a new average for Geekbench multi-core results and Cinebench CPU results, and we’ve noted those scores as “re-tested” in our benchmark notes.

That raises some concerns for thermal management, as the Envy 13t may not manage to keep cool enough to offer sustained boost speeds. But, since the laptop has never felt more than a little warm, it may be a trade-off HP has made for comfort.

For its lack in consistent multi-core performance, it excels in graphics for an Ultrabook. In our 3DMark and Cinebench graphics tests, the Envy 13t trounces the XPS 13 with integrated graphics. It handily beats the XPS 13’s Sky Diver score, and more than doubles its Fire Strike and Time Spy scores. These outpace Ultrabooks with the same CPU and integrated graphics, but don’t compare to laptops with higher-end dedicated graphics (Vega Graphics on AMD APUs are also a different story).

For its performance advantages, the Envy 13t also manages to offer efficiency with a long-lasting battery. It features a four-cell, 53Wh battery and supports fast charging that can go from drained to 50% charge in 45 minutes.

In our experience, the battery holds up well. We’ve sat down to do a bit of work with 30% charge without feeling anxious about how soon it would die.

After two hours of work (Chrome running with over 20 tabs, Slack open, music streaming, and one quick benchmark) with the screen at 50% brightness and modest battery-saver settings, we only lost 23% charge. After 3 hours and 15 minutes, we were down to 66% charge. We then took an hour lunch (3% lost during lunch). After, we moved outdoors and increased the screen brightness to its maximum, where the battery only dropped to 57% after another hour running. After 3 hours of running at max brightness, we’d gone down to 21% charge (a 42% drop). We kept going, and eventually battery-saver mode kicked in and dimmed the screen, but we made it to well over 7 hours of active time with the screen at max brightness for most of it.

Our tests also showed strong results. With a PCMark 8 battery life test result of 5 hours and 39 minutes, the Envy 13t exceeds the XPS 13, HP Spectre x360 and HP Spectre 13 all by more than an hour.

It’s longevity is even better for video playback. In our test playing a looped 1080p video with the screen at 50% brightness, the Envy 13t managed to chug along for a full 11 hours and 32 minutes before running out of juice. That’s enough time for even some of the longest intercontinental flights, and it could go even longer with the brightness lowered to a level that would likely be reasonable in the dim cabin of an airplane.

The HP Envy 13t puts a lot into one package, going premium in many ways while keeping the price well below some of its competitors. The laptop’s design earns it plenty of credit, and its overall performance leaves little to be desired outside of serious multi-core workloads.

Among its contemporaries, the HP Envy 13t is an excellent-value Ultrabook. But, with Intel Ice Lake and Intel Comet Lake CPUs showing up, the Ultrabook market is likely to get a lot more competitive soon.