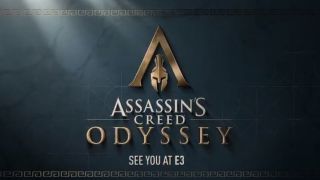 This morning I turned into the Pepe Silvia meme of Charlie in It’s Always Sunny in Philadelphia because Assassin’s Creed Odyssey was announced and I don’t know how to take news at face value and wait patiently to hear more.

The short clip shown of the game certainly seems to suggest it will be set in Ancient Greece; not only because we have what looks like a Spartan soldier properly 300-ing what could be an Athenian soldier off a cliff, but also because the end of the trailer shows the symbol often seen on Spartan shields, with the iconic Spartan helmet beneath it.

According to Kotaku, sources close to Ubisoft have said that the game is a direct sequel to Origins but to include these ancient Greek figures and the Spartans, we’d have to go to a time hundreds of years before the story of Origins. Interestingly, Kotaku’s Jason Schreier has said there are also sources who have played the game who say that it’s set hundreds of years before Origins.

So what’s going on then? How can a game be set hundreds of years before and still be called a sequel?

Well, if we’ve learned anything from Assassin’s Creed it’s that chronology doesn’t really mean much. You don't need to be going forward in time to continue to tell a story. If anything, to tell an origins story you need to trace back.

I’ve been doing some conspiring that makes me feel absolutely certain that Assassin’s Creed Odyssey will be a sequel to Origins, simply in the thematic sense that it will continue to tell the story of how the ideas and tools of the Assassin’s brotherhood were formed, rather than that it will be a direct chronological continuation.

It’s the Spartan symbol at the end of the announcement trailer that got me wondering. There’s no denying that it’s the symbol of Sparta, but it also looks like the top of the Assassin’s insignia, which, in turn, looks like the point of a hidden blade.

If you then see the curved base of the official Insignia as an eagle in flight, as I did, you’ll probably start to see where I’m going with this.

While Assassin’s Creed Origins showed us the dawn of the term for the brotherhood’s Eagle Vision, I’m sure Odyssey will take us further back in time to tell us the origin story of the hidden blade.

In Assassin’s Creed Origins, Aya gives Bayek a hidden blade which she says once belonged to an assassin called Darius.

Darius appeared in Assassin’s Creed 2 when Ezio’s uncle showed him statues of the figures behind the formation of the Brotherhood. We see a statue of Darius alongside Amunet (who we now know to be Origins’ Aya) and find out that he assassinated the Persian King Xerxes during the Greco-Persian wars using the hidden blade Aya has in Origins.

The time of Darius’ use of the hidden blade would perfectly fit with the proposed ancient Greek setting of Odyssey since the Spartans were a key force in defeating the Persians. It was a pan-Greek effort, but the Spartans always stand out – just look at the battle of Thermopylae. The Spartans didn't adopt the symbol until around 420 BCE, shortly after these events, so this could be origin of the adoption of the symbol for both Sparta and the assassins.

Although it would be taking us backwards in time, it would continue to tell the story of the ideas and tools that came together to create the Assassin’s Brotherhood.

We saw the early version of Eagle Vision with Bayek, which could make up the wing-like base of the Assassin insignia, now we could see the origin story of the hidden blade which tops it.

That's not to say any assassin in Odyssey wouldn't have some form of Eagle vision – it's a sense that assassins are able to tap into after all – but we'd be at a point in time before the story of the assassin that gave the skill its name, which would explain why this is the first game we’ve seen for the series that doesn’t have the fully intact Assassin’s insignia.

Or, I might need a lie down before I go full Dan Brown. Regardless, knowing next to nothing about a game before it’s release is one of the most exciting parts of it.