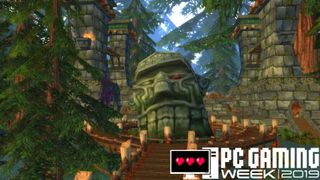 As part of TechRadar's PC Gaming Week 2019, we've thought long and hard about what the most important PC games of all time are.

So, what makes a game ‘important’? For many, it’s a totally subjective argument based on which games have made the biggest impact on your gaming life.

However, there are some games that have done more than gained legions of fans - this is the software that’s shaped the ebb and flow of the industry. From graphical milestones to the creation of a entirely new genres, these are the games that elevated PC gaming with every release.

That's why we’ve gathered together ten of the best, highlighting just why they have been so influential in shaping the course of PC gaming.

It’s impossible to overstate just how influential Civilization has been on strategy games, world-building sims and PC gaming in general.

Alongside SimCity and Populus, MicroPose’ seminal piece of software took something as vast as building and nurturing numerous empires through time and somehow made an interactive experience with untold control at your fingertips.

The original MS-DOS versions looks positively antiquated today, but it’s been remade and remastered multiple times over the years so it’s far from lost. While its sequels would go onto refine its sim systems and mechanics, the original remains the blueprint that made the biggest impact of all.

There have been so many seminal shooters over the years, but very have had the impact that id Software’s 1993 release enjoys.

Shooters existed prior to its arrival, but Doom pioneered so many the principles we still see today. Playing in first-person perspective; open-ended levels full of secrets; spatially open environments; copious amounts of gore and ultraviolence.

It didn’t rewrite the FPS handbook, it authored the first edition. There’s a reason it’s been ported to every platform imaginable - even today, its huge arsenal of weapons and bestiary of hellish enemies remain steadfast in their relevance.

You can see Doom’s DNA in every shooter that followed, and you will for decades to come.

The role-playing game has taken many forms over the years, but only one decided to shed the layers of multi-genre influence in the way Diablo did in 1996.

Blizzard’s top-down creation stripped away all the detritus and firmly put the ‘action’ back in action-RPG.

Diablo is all about the combat, and what glorious combat it is. It banished the steep difficulty spikes that had made the genre so impenetrable and instead focused on upping the creativity of its dungeons.

Quests and level layouts were procedurally-generated (a gameplay mechanic that still feels fresh today, never mind over 20 years ago), while the introduction of multiplayer enabled players to team up or go head to head for fantastical glory.

In the same year that Diablo was rewriting the rules for RPGs, a small British studio by the name of Core Design introduced the world to a game (and a lead character) that brought 3D platforming kicking and screaming into a new era.

With her dual pistols and pointy polygonal assets, Lara Croft’s first adventure as the titular Tomb Raider has had just as much impact as Mario’s first foray into 3D space.

Platforming no longer consisted of floaty leaps, but required a careful combination of timing and precision. Environmental puzzles were deep, elaborate and multi-faceted. And the gunplay? Well, few games escalate with quite the imagination of Tomb Raider. Wolves? Nah. Raptors? Nah? A T-rex? Oh, go on then.

Doom was the game that defined what a first-person shooter was to an unsuspecting PC gaming community in the early ’90s, but Half-Life would revolutionise that concept by the time the decade had drawn to a close.

Even if you disregard how its popularity eventually led to the creation of the revolutionary delivery platform Steam, Half-Life showed shooters could be something more than just bullets, blood and baddies.

It was the thinking man’s FPS, a game that was unafraid to place a dystopian sci-fi story first and foremost. It popularised the concept of using environmental puzzles, and wantonly spliced genres in a way we’d never seen before.

The humble RPG has gone through many regeneration over the years, and the one it took in the form of Baldur’s Gate remains its most quintessential.

With Canadian studio Bioware at the helm, it was the first RPG to use the now legendary Infinity Engine, which gave the game an instantly recognisable 2D art style. (A style so popular Obsidian designed 2015’s Pillars of Eternity around that much-loved look.)

With its Forgotten Realms setting and Advanced Dungeons & Dragons ruleset, it would take until Bioware rewrote the rules yet again with Star Wars: Knights of the Old Republic for Baldur’s Gate to feel anything less than compulsory playing.

The consequence and choice of the Human Revolution and Mankind Divided might not seem that remarkable today, but at the turn of the millennium the sheer influence you as a player had over the world you inhabited in Deus Ex was invigorating and startling in equal measure.

Sure, you could pull out a gun and shoot NPCs or sneak around dangers if you so wished, but it was depth to which those actions played out that struck home the most.

From the freedom of exploration you were afforded to the breadth of dialogue choices only found in traditional RPGs, this mechanical cross-pollination made Deus Ex a unique prospect that few titles have matched since.

While the likes of Baldur’s Gate were delving deep into classic D&D rulesets, Bethesda was working on a very different but equally immersive action-RPG of its own.

When it arrived in 2002, Morrowind brought the series into the third dimension and with a more powerful engine at its disposal, and it doing so it created something intrinsically unique.

With its Dwemer factories buried deep into the ground, and its fungal fauna rising high into the sky, not even Oblivion or Skyrim could match TESIII for sheer creativity. Free of the technical constraints that dogged Daggerfall, Morrowind was a virtual world that influenced every action-RPG that would follow in its footsteps.

While its been through myriad overhauls since its 2004 inception, World of Warcraft set in stone what a robust and commercially successful MMO (massively multiplayer online) could and should be.

Pulling from the deep and rich lore of the Warcraft series, WoW broke from the traditional real-time strategy of its forebears and focused on an action-RPG template.

Set in a cartoonish depiction of Azeroth, World of Warcraft managed to bridge the gap between a shared online space and a narrative experience that engrossed each player individually. And, while it may not be the subscriber powerhouse it once was, its place among the MMO greats will never fade.

Much like The Elder Scrolls V: Skyrim and Doom, Minecraft has been ported to just about every modern platform there is, but that hasn’t detracted from the sheer impact it’s had on PC gaming as a whole.

From its earliest origins in the late ’00s, to the latest innovations from the Bedrock Edition update, Mojang’s creation suite has inspired a generation of gamers to start thinking with blocks. From the test of Survival mode to the unbridled depth of Creative mode - and let’s not forget the incredible mods and texture packs it’s spawned from the community - Minecraft has become less of a game and more of an ongoing phenomenon - and one that’s likely going to shape the developers of tomorrow.

Its also become the best selling PC game of all time, and we take an in-depth look into the history of Minecraft for PC Gaming Week.