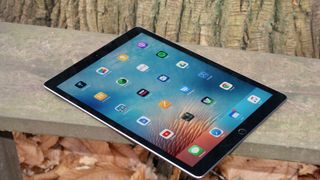 It’s been rumored for a while that the iPhone 8 might ditch the home button and instead have a fingerprint scanner built into the screen, but it now seems we might not even have to wait for the next iPhone to see that, as it’s now rumored that an upcoming iPad will launch with the feature early next year.

According to Macotakara – which has a solid track record for Apple leaks – one of Apple’s upcoming iPad models will have a 10.9-inch screen with exactly that feature.

The site adds, citing an ‘informed’ supply chain source, that it will have the same footprint as the iPad Pro 9.7, despite the larger screen, as removing the home button will allow Apple to shrink the bezel - something we've heard word on before.

However to achieve this Apple will apparently need to make the 10.9-inch iPad Pro 2 slightly thicker than the iPad Pro 9.7, going from 6.1mm all the way up to a HUGE 7.5mm (which,lest we forget, is the same thickness as the iPad Air... and a pencil).

The source adds that the top bezel, containing the FaceTime camera, will remain, and that the iPad Pro 2 12.9 will be getting 3mm thicker too – which suggests that slate could also lose the home button.

This would be a huge change for Apple’s iPad range, so we’d take it with a pinch of salt for now, especially as this is the first we’ve heard of a 10.9-inch screen, though a new 10.5-inch size had previously been rumored.

Whatever the case we should know the truth soon, as Apple is likely to launch its iPad Pro 2 range in early 2017, possibly as soon as March.