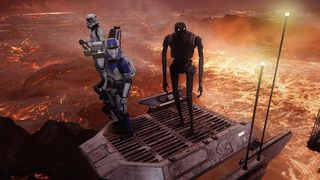 It’s been a source of constant glee amongst Star Wars fans that, despite their status as the most fearsome warriors in the Galaxy, Stormtroopers would struggle to shoot fish in a barrel.

Suddenly we can see why. Their trademark E-11 blaster rifle is far more unwieldy than it looks, and frankly its piddly little scope is close to zero use in a close-range firefight.

Playing as a Stormtrooper will be familiar to anyone who’s played a Battlefront game, but what we had the chance to experience this week felt completely different.

Star Wars: Secrets of the Empire is a new virtual reality experience that’s setting up shop in London’s Westfield shopping centre for 12 weeks starting today. The experience is a collaboration between LucasFilm, ILMxLAB and VR specialists The Void, and tells an original story set between Episode 3 and Rogue One.

But it almost feels as though calling it a VR experience sells it short, especially when the area has become so sullied over the years by mobile VR games and 360 videos masquerading as VR.

Pulling out all the stops

Secrets of the Empire, in contrast, pulls out all the stops in making you feel like an actual Stormtrooper. For starters, each VR headset has a Leap Motion tracker built into the front of it, meaning that when you look at your hands and flex your fingers you can see their virtual counterparts doing the exact same thing in real time. This is coupled with the fact that you wear the computer powering the experience in a laser-quest like breastplate, which means you're not tethered to a fixed point, allowing you to walk freely around The Void's substantial physical play space, rather than using virtual locomotion.

Unlike most other VR games, it’s also a local multiplayer experience which you and up to three friends play through. Combined with the head and hand tracking, this means you can look at your virtual companions and see them almost exactly as they are in real life. You can even hi-five each other physically, although the slight lag introduced by the Leap Motion means you’ll have to be careful with your aim.

At every turn there are more small details to discover, all of them subtly implemented in a way that betrays how expensive they must have been to include. Your harness vibrates in specific locations if/when you get shot, the set blasts you with heat as you enter the experience’s lava-filled areas, and the whole location even vibrates as the virtual ship you're running around starts to explode and fall apart.

LucasFilm’s Diana Williams is particularly fond of one moment where you’re encouraged to step on a patch of lava, and are rewarded with a satisfyingly squishy surface.

“That’s my favourite part,” she says, recalling how the team designed that segment of the attraction.

“We had to have something squishy, so we went out and bought a bunch of stuff, and just started stepping on things to try to figure out what it felt like...It’s low tech, but it adds that little bit to the experience, and that’s the whole point of The Void.”

A step above home VR

All of these subtle elements combine to create a feeling of presence that has rarely been felt to the same degree in any other VR experience.

The comparison against a high-quality tethered VR headset, where a person is restricted to walking around a small space at home at best, is marked. That’s not to say The Void experience takes up a great deal of space, but not being tethered to a PC means that after you’ve turned around a couple of times you completely lose track of what direction you’re facing in, allowing the space to feel far bigger than it actually is.

In fact at one point Williams explains how the experience started life in little more space than her office.

“We first start off clearing my office out and marking out with masking tape on the floor what people will go through. So we all walked through it with post-it notes marking out “here we get guns!”, “something happens!”, figuring out what could we possibly do in each room," she recalls.

This is VR at its most feature-packed, but all these disparate elements are combined together in a way that feels much more like a finished product than a lot of what’s on the market at the moment. Despite the fact that you’re literally wearing a computer on your back, the construction of the harness makes it feel little more inconvenient than a half-filled backpack, and the headset is built into a helmet that feels like a finished product rather than a prototype.

Yet, the team emphasises that they didn’t use this massive list of technology just because they could, but that they instead drew upon what they needed based on serving the story.

“You look at VR over the last several years, it’s been about the gadget,” The Void’s CEO Chris Plummer explains.

“We integrate a lot of components that we can buy and some that we develop ourselves to achieve an effect that we really want to emphasise in the story itself. What I like about it is it’s not just computer graphics, but some physical aspects which really make it special.”

With so much going on, it felt like it was impossible to take it all in with just a single playthrough. According to ILMxLAB’s Ben Snow however, this was a decision to reward the curious player, rather than to force people into paying for multiple playthroughs.

“We want to make it feel immersive, we want you to look everywhere, see something, and be rewarded by it,” he says, “It’s not necessarily a calculated [attempt to encourage multiple playthroughs], but we have to animate everything and have everything covered.”

The return of the arcade?

The experience was so full-featured, that it's easy to wonder whether this is VR’s future. Speaking at the E3 gaming show earlier this year, veteran game developer and early Oculus investor Cliff Bleszinski shared a similar view.

“It’s going to be location-based entertainment and then the rich friend who has it at their house for the foreseeable future,” Bleszinski said when asked what hope VR has for mass-market adoption.

But when asked the same question, the team behind Secrets of the Empire  were more optimistic about the ability for the two different forms of VR to co-exist.

Regardless of LucasFilm’s investment in all areas of VR, there was a definite feeling that Secrets of the Empire made sense in a way that few other short, home-based VR experiences have done in the one and a half years since consumer VR headsets first became a reality.

With a price of £32 and a run-time that clocks in at around the 20 minute mark, Secrets of the Empire might end up being too expensive for all but the most hardcore of Star Wars fans - but anyone prepared to pay the price will get a tantalising glimpse at virtual reality's bright arcade future.

Secrets of the Empire opens today at the Westfield Shopping Centre in London, and will be running until March 12th.