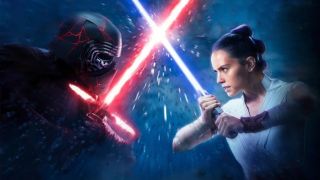 Now that we've lived through The Rise of Skywalker, and either liked it, hated it, or had no strong opinions either way, we're living in a world in which no more Star Wars movies are planned until 2022. That next movie remains a mystery outside of rumors, although an announcement is reportedly planned for this month, but we're in the age of undying intellectual properties. Nothing can keep Star Wars away this year.

Below, we've rounded up the biggest and best Star Wars-related events coming in 2020, from new Disney Plus TV shows to games to theme park rides. There's something for everyone (well, everyone who likes Star Wars, anyway), whether you're following every little development in the Star Wars canon, or simply want a plastic replica of Baby Yoda to haunt your home.

We've also included one bonus entry at the bottom, based on a juicy rumor…

1. The final season of The Clone Wars

The Clone Wars has a reputation for correcting the worst aspects of the Prequel Trilogy, turning that part of Star Wars' history into a genuinely exciting backdrop for new adventures.' Years after it went off the air on Disney XD, The Clone Wars' seventh and final season will land on Disney Plus starting on February 17.

Disney Plus hung its fortunes on the Jon Favreau-created live-action Star Wars TV show at launch, and it paid off. A second season of The Mandalorian has been in the works since the first season began releasing on Disney Plus, and in December, Favreau confirmed that it'll air later this year. Expect to learn more about the phenomenon that is Baby Yoda.

The first issue of a new ongoing Star Wars comic launched on New Year's Day, moving Marvel's canonical tie-ins to that exciting time period between The Empire Strikes Back and Return of the Jedi. Alongside that, the currently-running Star Wars: The Rise of Kylo Ren – from the same writer, Charles Soule – explores the early days of Ben Solo. A new Darth Vader comic launches in February, too, and a bounty hunter-focused book in March.

4. The Rise of Skywalker (and Solo) on Disney Plus

In Australia, Disney Plus already has a complete collection of Star Wars movies (minus The Rise of Skywalker, of course), and in 2020 the US will have the same. Episode 9 will release on the streaming service at some point this year, while the US finally gets Solo: A Star Wars Story on July 9, 2020. The Han Solo-focused origins movie is a lot better than its poor box office performance suggests, and you can watch it on Netflix US now if you'd rather not wait.

More Star Wars books were revealed at New York Comic Con last year (thanks, io9), including the first of a new series about fan-favorite character Thrawn, The Ascendancy Trilogy, by Timothy Zahn. That book, titled Chaos Rising, arrives in May. Shadow Fall, a continuation of the Alphabet Squadron series, lands in June 2020. Meanwhile, if you enjoy chunky coffee-table books, the official art of The Rise of Skywalker hardcover is released in May.

We narrowly escaped Baby Yoda merchandise in 2019, because creator Jon Favreau and Lucasfilm wanted to keep the creature's presence in The Mandalorian a secret. That grace period must now end, however, and starting in March we'll see heaps of stuff roll out bearing the adorable character's image. Not all of it looks that great, particularly the apparel bearing The Child's face, but you can be damn sure that there will be significant demand for the Baby Yoda Funko Pop. This should distract us from the eventual heat-death of the universe for a little while.

7. Battlefront 2 and The Old Republic updates

EA hasn't released a 2020 roadmap for Star Wars: Battlefront 2 yet, but, after more than two years of updates, there's still more to come. In January, BB-8 and his First Order equivalent, BB-9E (informally referred to as BB-H8) join the multiplayer shooter. Capital Supremacy mode is coming to the Sequel Trilogy era, too, and the game will add more offline options for players. EA has more planned for February and March, but hasn't yet revealed what. MMO The Old Republic is still receiving updates after eight years, too, so you can expect more from that this year.

Most major Star Wars reveals happen at Lucasfilm's own Celebration event. It's where The Rise of Skywalker's first trailer was revealed, along with the fact that Palpatine was part of the movie. At this year's show in Anaheim from August 27-30, you're likely to hear more about the Obi-Wan series starring Ewan McGregor, the Cassian Andor-focused TV series, The Mandalorian season 2, game projects from EA, and brand-new announcements for Star Wars' future.

Star Wars: Rise of the Resistance launched in Disneyworld Florida in 2019, and later in January it arrives in Disneyland Anaheim as part of the existing Galaxy's Edge area. This ride has you being shot at by the First Order, evading AT-AT walkers, and even features an encounter with Kylo Ren.

Not all Star Wars games are made by EA, and last year TT Games surprised us by announcing a new Lego Star Wars game with the subtitle The Skywalker Saga. It encompasses all nine of the movies, and you can travel to any planet you want at any time, and play through the overarching story in the order you see fit.

In 2019, rumors circulated that Lucasfilm is preparing a secret Star Wars spin-off based on the Marvel comics-originated character Doctor Aphra for Disney Plus this year. That came from Jason Ward of MakingStarWars.net (via Inverse). "I'm hearing it's a Lucasfilm-Marvel venture with both companies teaming up to bring a Star Wars show to the small screen," Ward said, adding that it may already be filming as of 2020.

As ever with this kind of rumor, don't take it as fact. But Ward did get it right when he said Yoda's species would play a key part in The Mandalorian before the show launched. Wouldn't it be the event of the year if a new Star Wars TV show just dropped out of nowhere? We want this to be true.