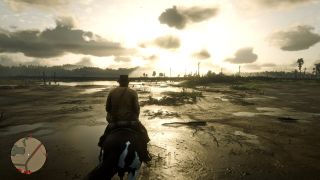 Red Dead Redemption 2 has only just been unleashed on PC and a number of mods are already out for the game.

As Eurogamer spotted, the mods include one from DigitalDreams which is a ‘photorealistic’ makeover under ReShade (a graphics post-processing tool – so you’ll need to install that first as per the instructions given) which claims to enhance colors, shadows, tonemapping and sharpness.

There’s already a second one of these mods available, in actual fact (the Simple Realistic ReShade).

Another modder has shared a save file which has been saved just after the intro, allowing you to download and use this to effectively skip the introduction on PC if you’ve already played the game on console. That’s pretty handy – just follow the instructions and place the file in the correct game directory (C:\Users\<name>\Documents\Rockstar Games\Red Dead Redemption 2\Profiles).

There’s also another save file from the same modder if you want to begin at the start of Chapter 3.

Furthermore, you can grab an ‘Arthur Morgan as the Joker’ mod, which, as the name suggests, gives the protagonist a make-up job to make him look like the Joker. By the looks of things, we can expect many more mods from these guys, including one which gives Arthur the appearance of the Terminator. “I need your clothes, your boots, and your horse…”

Other early mods include altered audio files to make the game sound like the first Red Dead Redemption (which of course never saw a PC release) including the original soundtracks (for nostalgia’s sake).

All of the above efforts come from Nexus Mods, by the way, and doubtless there will be a good deal more very soon.

We are also expecting a real biggie in terms of RedM, the Red Dead Redemption 2 equivalent of the popular GTA V mod FiveM, which lets you fire up your own custom multiplayer servers (to make a role-play server, for example). The maker has promised that this mod will arrive in December, so fingers crossed it stays on track.