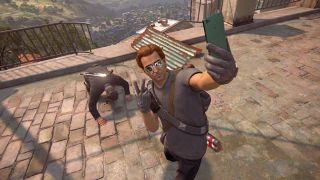 Uncharted has become one of the most iconic game franchises of all time, best known for its unique set pieces, stunning landscapes and great dialogue – and, soon, the ability to take selfies as Nathan Drake.

After the success of the selfie camera in GTA V, it seems Uncharted 4 will include a camera phone in its new multiplayer mode – and of course it's the Sony Xperia Z5.

Uncharted 4 is currently testing out its multiplayer beta mode on PlayStation 4, in which you're able you whip out Sony's latest flagship phone and take a selfie over your victims.

Screenshots and gameplay footage clearly show it's the new Sony Xperia Z5. It has the same frosted glass back, the Sony logo in the same position with an NFC logo just above, and you can also see the metal edges.

It seems you'll always be using this green version of the phone, no matter what character you play as. It's a cool little feature – but really, couldn't Naughty Dog have just gone with a generic handset?

It's just another example of Sony's aggressive product placement.

Take Hotel Transylvania 2, for example – a film made by Sony Pictures Animation – in which the main character Count Dracula brandishes a Sony phone. It feels a bit much for an animated film about vampires and werewolves.

It was a similar story in Neil Blomkamp's Chappie, distributed by Sony's subsidiary Columbia Pictures and in which the title character got his hands on some Sony PlayStation 4 consoles.

Chappie takes his new PS4 collection, wires them all up together and uses the computing power to transfer his consciousness.

It makes sense with the storyline, but the fact that the PS4s appear in their packaging, and are clearly name-checked, makes it feel a bit too ham-fisted.

Then we have the Bond films, well known for their not-so-subtle product placement. According to leaked emails, Sony paid Daniel Craig £3.3 million to hold up the Xperia T3 in Skyfall.

Sure, product placement is rife in Hollywood, and Sony's not the only big offender. But can't we have a bit of restraint? Having the phenomenon spread to animated films and video games feel like a step too far.

You can watch a video below of Nathan taking a selfie in the Uncharted 4 multiplayer beta.