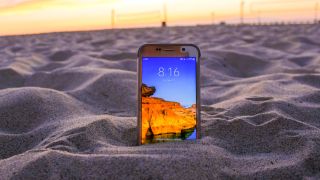 The Galaxy S7 Active enjoys a day at the beach.

The Samsung Galaxy S7 Active is now out and available for US customers but a test run over at Consumer Reports suggests it might not be quite as waterproof as it says it is - after 30 minutes under five feet of water, the testing team noticed damaged to the touchscreen and the cameras.

Like the Galaxy S7 and the Galaxy S7 Edge, the S7 Active has an IP68 rating, which means it should be good for the 5 feet/30 minute routine. Incidentally, the S7 and S7 Edge did pass the same Consumer Reports test, though here two S7 Active handsets failed.

We don't want to put you off buying an S7 Active - if there is a defect it'll be covered under warranty after all - but it might be worth running your own experiments on the phone to see how well it holds up, before heading out to the beach or the swimming pool.

Samsung says it's had "very few complaints" about water damage and is going to investigate the issue. "There may be an off-chance that a defective device is not as watertight as it should be," the company said in a statement to Consumer Reports.

The technicians running the test found that the phones hadn't returned to normal after two days of drying out. They did find the S7 Active performed very well in other tests, however, though it doesn't make the recommended model list.

Waterproofing is a feature that comes and goes on phones - even those with an IP68 rating are only waterproof up to a point, and implementing the feature can cause extra headaches for manufacturers. Maybe one day we'll see a fully waterproof phone, but that day hasn't arrived yet.