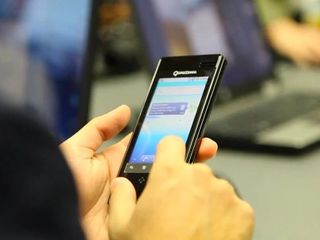 Don't get excited, it's just a reference device

Sneaky Qualcomm held a blogger round-table during Verizon's all-encompassing press conference in order to show off some new tech, including its dual-core Snapdragon processors.

The super-charged CPUs with 1.2GHz and Adreno 220 graphics will be found in a host of smartphones and tablets as the year progresses.

Our first glimpse of it may come in the Asus Eee Pad Memo (UK release date somewhere between May and September 2011).

Qualcomm had a piece of reference hardware that it used to show the chip's capabilities off.

These included physics-enabled games, HD stereoscopic 3D video (which was also streamed to a TV) and multi-participant video conferencing.

Battery-hungry handsets will also be able to conserve power by switching one of the cores off and running from a single one.

Pretty impressive stuff kept a little bit under wraps; let's hope that Qualcomm makes a bit more of a splash with this at MWC 2011.

Via Anandtech and Engadget