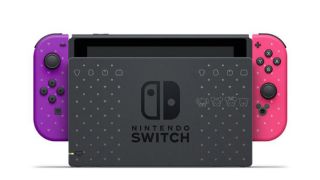 Nintendo has announced it is releasing a Disney-themed Nintendo Switch console in Japan.

The Tsum-Tsum Festival Nintendo Switch bundle launch will coincide with the release of the Tsum Tsum Festival game, which is due for release in Japan on October 10.

Tsum Tsums, for those who aren't in the know, are a range of stackable Japanese collectible stuffed toys based upon Disney characters. The Tsum Tsum Festival game is a party game based on the toyline.

Check out the Tsum Tsum Festival trailer below:

This isn't the first time Disney has batted its eyes at the Nintendo Switch console. The company has previously shown interest in bringing its online subscription service Disney Plus to the platform.

The streaming service will launch in the US on November 12, 2019 with an expected (but not yet officially confirmed) UK launch date around the same time or a few months afterwards. However, it hasn't been confirmed yet if the service will actually be coming to Switch or not, and if so, when.

The Tsum-Tsum Festival Nintendo Switch bundle will sell for 36,080 yen (roughly $333) and will be released in Japan on October 10. However, there are currently no plans to release the special edition console outside of Japan.