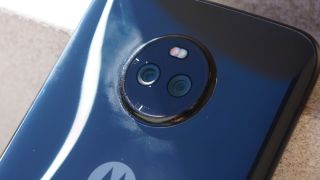 A new image of the Moto X4 retail box has surfaced ahead of the launch, courtesy dealntech.com. The leaked photo suggests a price tag of Rs 23,999 for the Moto X4 in India. To recall, the phone was launched at IFA 2017 held in Berlin continuing the X-series of smartphones from Moto. The image further reveals a 4GB RAM and 64GB storage variant of the the phone. Also, the company has started sending out invites for the launch of the X4 in India on November 13.

Earlier, the phone was slated to launch on October 3 but the company delayed the launch further due to unknown reasons. Moto X4 is aimed to fill in the segment that was missing between the Moto G and Moto Z line-up. It’s basically a Moto G5 Plus with a little more power, better front camera and a gimmicky dual-lens camera. There’s no doubt that the shiny back looks stunning and the curves on the sides add up to give it a better feel.

The Moto X4 features a 5.2-inch full HD (1920x1080 pixels) LCD panel with Corning Gorilla Glass on top. Under the hood lies an octa-core Qualcomm Snapdragon 630 chipset with Adreno 508 GPU coupled with 4GB RAM and 64GB onboard storage. It is also IP68 certified, which makes the phone resistant to dust and water for up to 1.5 meters and 30 minutes.

On the camera front, the Moto X4 has a dual 12-megapixel + 8-megapixel rear sensors with f/2.0 and f/2.2 aperture respectively. On the front it has a 16-megapixel front camera.

It runs on the Android Nougat 7.1 with Moto’s proprietary display and Moto Action like ‘chop-chop’ and twist to open camera. The phone draws power from a 3,000mAh battery that comes with fast charging support.

There’s no clue if the company will go with a cheaper 3GB RAM and 32GB storage variant in India.