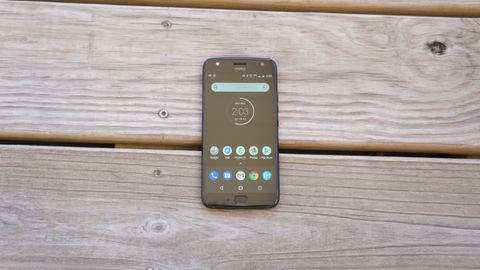 The Moto X4 makes it clear that the true successor to the Moto X line is the Moto Z line. It's a mid-range phone with Android One and Google Fi, but otherwise a small upgrade from a Moto G5 Plus or Moto G5S Plus, with a bump in price that sits in the awkward middle of Motorola’s flagship and budget phones.

The Moto X4 is Motorola’s affordable, mid-range smartphone that fits somewhere in between the flagship Moto Z2 Force and the budget-level Moto G5, and comes awkwardly close to the Moto Z2 Play price without the perk of Moto Mods.

It inherits features from both phone series, like a dual-lens camera, water resistance, a fingerprint scanner and a lot of the same design cues. Inside is where it sets itself apart, with its mid-range Snapdragon 630 chipset.

There is something else special about the Moto X: it’s the first non-Google Android One phone in the Western world, and it’s eligible for Google’s Project Fi mobile network. There’s also a version available through Amazon Prime in the US for a discounted price, if you don’t mind lockscreen ads.

Other than those features of the Android One model, most versions of the Moto X4 are similar, with models outside of the US having an option for more storage and slightly increased memory.

Any of the Moto X4 variants face serious competition from rival handsets like the OnePlus 5 at a slight uptick in price and even Motorola’s own smartphone lineup. The Moto Z2 Play, for example, benefits from the use of MotoMods, and the price is hardly any different. There are some likable features here, but not enough to recommend over a phone at a very similar price point.

If that’s a little more than you’d like to pay all at once for a mid-range phone in the US, you can get it on contract for $16.63 a month for 24 months through the Google Store. It’s much cheaper than other Google Fi phones sold alongside it, like the Pixel 2 and Pixel 2 XL.

Do note that there’s an Android One/Google Fi version of this phone and another one sold by Motorola, with the latter configuration boasting a few more software features that affect the hardware (Moto Display, Moto Voice and special fingerprint sensor controls). The even cheaper Amazon version retains these Moto-exclusive features.

Motorola is touting the Moto X4 as a way to “get octa-core performance without sacrificing style,” and that’s only true if you like Motorola’s signature phone design and can’t afford any of the other truly stylish octa-core phones out there like the Galaxy S8, Note 8 or very-close-in-price OnePlus 5.

It follows current Motorola design practices: smooth curves at the top and bottom, an oval-shaped fingerprint scanner at the bottom of the screen and an oversized rear camera bump aligned in the top-middle of the device. The screen is flanked by bezels on all sides that feel a bit 2016. The power and volume button are all on the right side and feel solid. There’s no speaker grille on the bottom, as the sole speaker is at the top of the screen, doubling as the earpiece for phone calls.

It’s a decent looking phone, but like many mid-range devices, we’re certainly not calling up our friends to tell them how cool it looks. It feels like the Moto X4 actually does sacrifice some style, but at least it doesn’t sacrifice the 3.5mm headphone jack.

Moto X4 feels solid and smooth in the hand thanks to its glass back and metal frame, though all the glass does feel like a shatter risk. The metal frame doesn’t rise up any to take the brunt of a fall if the phone lands flat. It is protected from water and dust at least, with an IP68 rating that means a half-hour dunk in the shallow end of a pool is no big deal.

The sad truth of the design is that it looks kind of boring in 2017. Forget all-screen, this is an all-camera bump phone, with its dual-lens camera being the one element that stands out. Worse, the rear of the phone is cursed by an unfortunate gap between the smudge-friendly glass back and metal frame that makes for an unsightly dust trap. Compared to the aptly named Moto X Style Edition, its predecessor, Moto X4 feels stripped of any identity as Motorola puts its best ideas in the Moto Z line.

The Moto X4 has a 5.2-inch Full HD display that fits its mid-range identity more than the flagship Moto Z2 Force. It gets the job done with high enough pixel density for everything other than VR.

With so many phones making the switch to OLED displays, including the similarly priced Moto Z2 Play, it’s a shame to see the Moto X4 using only an IPS display, which lacks the pure blacks of OLED.

Moto Display lets you interact with notifications now, so you can quick reply to text messages with the keyboard or your voice, or pause and play music, all without ever having to fully unlocking or lighting up the phone.