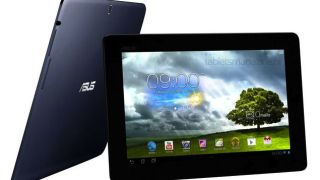 It also comes in white and pink

The Asus 10-inch Android tablet has resurfaced with leaked press shots and a new name.

Now called the Asus MeMo Pad 10, it looks to be the same tablet as the ME301T model hinted at earlier this year.

If earlier reports still hold true, inside of the tablet is a mere 1GB of RAM and 16GB of internal storage, though at least the latter can be expanded through a microSD card slot.

The MeMo Pad 10 is hardly a powerhouse by any stretch of the definition, but that may work in the tablet's favor.

After CES, Asus announced the similarly underpowered 7-inch MeMo Pad with an attractive US$149 price tag to offset its specs.

The leaked press shots look like the genuine article, and show the tablet in gray, white, and pink, but there is still no official word from Asus confirming the MeMo Pad 10.

The tablet may make its official debut at MWC 2013 later this month, though Asus seems just as keen on announcements the day after a big event these days.