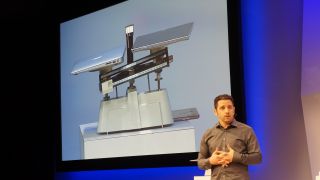 MacBook Air vs Surface Pro 3: Is that the right comparison?

One laptop to rule them all

Succeeding to Microsoft's CEO on stage, Panos Panay, VP of Microsoft Corporate and the man in charge of the Surface line, added that the company's "vision" is to "help people get stuff done." Many consumers, he said, do not know the difference between tablets and laptops and why they should buy one or the others.

The blend of laptop and tablet is, according to Panay, important to Microsoft and one of the reasons that the company created the Surface Pro. The latest iteration, dubbed the 3, updates the design. "This is a tablet than can replace your laptop," says Panay.

The design has been updated to be thinner at 9.1mm (the "thinnest Intel Core product ever made") and lighter (800g down from 910g for previous Surface models) with tapered edges giving a more visually pleasing feel. Next to an iPad or MacBook Air, the Surface Pro fits in where the previous model would've looked clunky.

The updated Pro has a 12-inch, 2160 x 1440 pixel, 3:2 display, up from the full HD 10.6-inch display on the Surface Pro 2. Microsoft is pitching the new Surface Pro squarely against Apple's MacBook Air, comparing the two on stage. The Surface Pro 3 has a new 4th generation Intel Core i7 processor, a fan (which is, according to Panay, 30% more effective than other fans on the market), as well as 8GB of RAM as standard.

Alongside the impressive specs of the machine, Microsoft has also updated the accessories that come with it. The new Type Cover has an updated trackpad nixing one of the biggest criticisms against the accessory. The Surface Pro 3 also comes with a new 'pen' which can be used in apps such as Photoshop—which was demoed on stage—opening the Surface up to creative markets previously held by Apple.

From yesterday's presentation, it is clear that Microsoft is gunning for the Ultrabook market with the Surface Pro 3. Repeated references to Apple's MacBook Air were made with Panay even having one on stage to compare to the new Surface. The tagline of the new Surface is "A tablet than can replace your laptop," a clear sign of where Microsoft is headed with the Surface Pro.

Instead of simply copying the iPad or building an Ultrabook to match those of Apple or Sony, Microsoft has opted to combine the two—the portability of a tablet combined with the processing power and screen on a laptop. When put like this, Microsoft's aims for Windows 8 are realised: the combination of touch and type into one operating system has never made more sense than on the Surface Pro which can be used by "type, mouse and touch".

Whether the Surface Pro will be a commercial success remains to be seen. So far Microsoft has made $2.5 billion from its Surface line (for comparison, Apple made around $7 billion from the iPad in the last quarter alone), which pales into comparison when compared to its other businesses.

The Surface Pro is a very expensive device, starting at $799 and going up to nearly $2,000 for a fully kitted-out model. Apple's MacBook Air starts at $899 but peaks at $1,750 for the highest end machine which could cause problems for Microsoft: why buy an untested hybrid when you can pick up a MacBook Air for $250 less?

Next Page What about the Surface Mini?
See more Laptops news