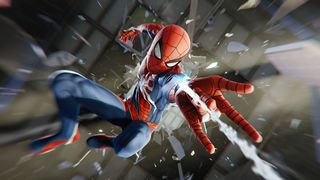 In September 2018, Marvel and Insomniac Games rocked our webbed socks with the launch of Marvel’s Spider-Man, a PlayStation 4 exclusive that deservedly brought one of the greatest fictional characters of all-time into the videogame spotlight once again.

Saying the title was well-received is an understatement, as it web-zipped up Game of the Year-lists faster than Stan Lee could say “Excelsior, true believers!”. Marvel’s Spider-Man was a resounding critical and commercial success, selling over nine million copies as of January 2019 and proving that the demand for this character, and narrative-based Marvel titles, is as abundant as it’s ever been.

With the success of Spider-Man still fresh, and Crystal Dynamics due to release Marvel’s Avengers in 2020, we feel like there’s no better time for an Avengers/Spider-Man game crossover. After all, millions of players fell in love with Insomniac’s take on Spidey and his supporting cast, so introducing that Peter Parker (or Miles Morales) into Marvel’s Avengers post-launch seems like a bona fide no-brainer, right?

Let’s explore how the potential crossover could happen.

The marketing machine for Marvel’s Avengers, set in motion following the game’s reveal at E3 2019, focuses on the idea that the game will “introduce a universe gamers can play in for years to come”.

This bold claim forms the basis of our theory about how Marvel could introduce characters from Marvel’s Spider-Man (and other upcoming Marvel titles) into Marvel’s Avengers.

During the game’s E3 reveal, it was announced that PlayStation had secured a marketing deal for the title that will see PS4 owners get priority access to the online beta, as well as a few unannounced future “surprises”.

Now, it may well be a little too optimistic to expect those “surprises” to include our PS4 Spidey as a playable Avenger, but aren’t we allowed to dream? It’s not completely out of the realm of possibility either, as Crystal Dynamics has been very open about post-launch plans for the game. The studio has confirmed that new playable heroes and regions will be added to the game for free in the years to come after the game launches in May 2020. We simply cannot fathom that the most famous and beloved Avenger wouldn’t be one of those post-launch DLC heroes on PS4.

Yes, Crystal Dynamics could easily have its own version of Spider-Man waiting in the wings, but it would be an enormous missed opportunity to ignore Insomniac’s character and start afresh. It’s not just because we love his suit or Yuri Lowenthal’s incredible performance as Peter Parker, a crossover could be so much more than a surface-level tie-in.

Imagine: Tony Stark hits-up Peter for his scientific brain (something already hinted at, more on that later), something goes wrong and boom, Spidey’s an Avenger for a while. Then, in Marvel’s Spider-Man 2, Mary Jane or Miles Morales could mention how great it is to have Peter back in New York after all his Avenging on the West Coast, that the city feels safe again.

We don’t need an Avengers: Infinity War-style epic from a crossover, just enough to build a believable world full of heroes, a world where characters are aware of events happening across multiple videogames.

As Marvel’s Avengers is being pushed as a live-service game that will be updated and iterated upon over multiple years following its release, there will inevitably be other Marvel Games titles, outside of the Marvel’s Spider-Man franchise, released while Crystal Dynamics is still creating content for their Avengers game.

The combination of new Marvel games releasing during the lifecycle of Marvel’s Avengers and the confirmation that new heroes are coming post-launch can only lead to one thing (we hope!): a Marvel Game Universe in which the heroes we know and love from their solo outings will continue their stories in Marvel’s Avengers. Though Crystal Dynamics is staying tight-lipped about that prospect for now...

Speaking of new Marvel games, how about a triple-A Guardians of the Galaxy game? Well, in January 2017, Eurogamer reported that Eidos Montreal, the studio helping with the development of Marvel’s Avengers, is also supposedly leading development on a Guardians of the Galaxy title. This would be the second title, following Marvel’s Avengers, in a “multi-year, multi-game partnership” between Marvel and Square Enix.

In a potential crossover similar to the one we’d love to see with Insomniac’s webslinger, could we see a future where Eidos Montreal’s Guardians of the Galaxy releases, and then the spacefaring team of criminals is called down to Earth to conquer a new threat in a Marvel’s Avengers expansion? It would make perfect sense to have both Eidos Montreal and Crystal Dynamics developing Marvel games set in the same universe with crossover potential, considering how closely the two studios are working together on Marvel’s Avengers.

Crossovers could form the backbone of the post-launch content that Crystal Dynamics develops for Marvel’s Avengers. With Marvel’s Spider-Man having been a huge success, and more Marvel games seemingly on the horizon, the studio has a significant opportunity with Marvel’s Avengers to forge a universe with a narrative thread spinning through each new story-driven Marvel game. It’s a pipedream, but it’s a pipedream that Marvel has the chance to fully realize.

While Crystal Dynamics and Insomniac Games have not actually confirmed whether we’ll see a coveted crossover between Marvel’s Spider-Man and Avengers games, there are a few nods to Earth’s Mightiest Heroes (and other Marvel superheroes) in Spider-Man that have us thinking the foundations may have already been lain.

Perhaps the most prominent is the Avengers Tower sitting pretty in Spidey’s New York, branding the skyline with that signature ‘A’ symbol. When you take a photo of the tower Peter Parker says, “Avengers Tower is so cool, but they’re never around to use it. I think they’re probably somewhere on the West Coast right now.” Oh, and you know where the Marvel’s Avengers E3 trailer says the Avengers are opening a new HQ? San Francisco. That cannot be a coincidence, can it?

In addition, in the opening cutscene of Marvel’s Spider-Man, the camera pans around Peter Parker’s room, and we get a glimpse of a sticky note which says, “Call T.S. back re: job offer”. Could Tony Stark have offered Peter a job? Perhaps, on the West Coast?

Another interesting sticky note reads, “RR suit fabric ballistic? Call to confirm”. RR almost definitely stands for one Reed Richards, or Mr Fantastic, of the Fantastic Four. Peter asking Reed Richards for suit materials makes sense, as he’s considered to be the smartest person in the Marvel universe. There’s been no confirmation of any Fantastic Four content for Marvel’s Avengers, but Marvel Games sure has the team on their mind, having been announced as DLC for Marvel Ultimate Alliance 3: The Black Order.

Aside from the Avengers Tower, there are a bunch of other landmarks that hint towards a connected superhero universe. Black Panther’s Wakandan Embassy can be found in the city, as well as Doctor Strange’s home, the Sanctum Sanctorum. In addition, the villain Taskmaster plays a small role in Marvel’s Spider-Man but also appears in the Marvel’s Avengers trailer sporting a changed appearance. There’s no telling whether this is the same Taskmaster - but it's always a possibility.

We’ll probably have to wait until May 15, 2020 to find out if a crossover is being assembled, but we’re cautiously optimistic that Marvel Games love crossovers as much as Marvel Studios do.