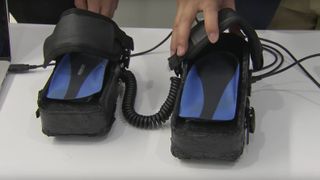 Five years ago, Gyorgy Levay lost both of his hands to a meningitis infection. The avid gamer could no longer use a traditional videogame controller.

But now Levay, and two of his colleagues at Johns Hopkins University, has developed an alternative controller that can be operated by a person's feet. Each sandal-like device includes three sensors that can pick up different foot movements and translate them into commands.

Their creation, which is called Game Enhancing Augmented Reality or GEAR, can simulate eight buttons in its most basic setup, or up to 20 buttons with some practice. They've used it to play a variety of games, including Counter-Strike, Fallout 4 and World of Warcraft.

"Next to our hands," said Adam Li, who also worked on the device, "our feet are probably the most dexterous part of our body." The solution recently won the $7,500 grand prize in the 2016 Intel-Cornell Cup.

During testing, the team recorded clips of characters being controlled by an amputee using the technology and asked web users if they could tell it apart from a player attempting the same section of the game using a normal controller. Out of the 51 people who responded to the survey, 81 percent failed to identify the GEAR-controlled character.

Levay says that the project is about more than just letting him play games again. "About 200,000 people in the United States alone have lost at least some part of an upper limb," he said, "and 20 to 30 percent of all amputees suffer from depression. They have a hard time socializing, especially young people."

"The GEAR controller allows people to socialize in a way in which their disability is not a factor," Levay said. "That was a key point we wanted to make with this device."

The team has obtained a provisional patent for the invention and is now hoping to license the work to a company that'll help make it more widely available.

"This is a very simple design," said Nate Tran, the third member of the team. "But it can potentially help a lot of people since it's wearable, and it's adjustable."